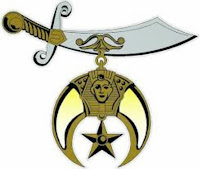 
Both may be correct, but there is a deeper meaning and mission that these Brethren take on than most people probably know.  Originally, the Shrine was established to provide a social and entertaining setting, to further Masonic Beliefs and Brotherhood.  Based on the Masonic creed of - “Faith, Hope and Charity”, holding “Charity” as the greatest, they created their own charity, The Shriner’s Hospitals for Children.

The organization is organized by “Temple’s” and controlled by an elected Board called a Divan.  The chief officer is known as the Potentate.  All Temples are overseen by Shriner’s International, the Imperial Divan and Imperial Potentate.  Each Temple has numerous Clubs and Parade Units for the members to be apart of based on their interests.

The first Temple, Mecca Shriners, was organized and established in New York City in 1872 by Walter M. Flemming (a prominent physician) and William J. “Billy” Florence (a popular actor).  By the early 1900’s membership was soaring as did the calling for the establishment of an official Charity.  In 1922, the first Shriner’s Hospital for Children opened in Shreveport, LA., providing pediatric orthopedic medical care, regardless of the families ability to pay.

Today, there are nearly 200 Temples (or Chapters) throughout seven different countries and thousands of Clubs around the world.  What started as one hospital has grown into one of the most world renowned healthcare systems with 22 facilities in three different countries.  20 of which provide specialized services in pediatric orthopedics, medical and rehabilitative services to children with congenital deformities and conditions, issues arising from orthopedic injuries and diseases of the neuro-musculoskeletal system.

In the 1960’s the Shrine recognized a lack of expertise in the field of burn care and henceforth entered the field.  The 1980’s saw the opening of the nation’s first spinal cord injury rehabilitation center which was specifically designed for kids of course.  These patients receive long term rehabilitation, physical, occupational and recreation therapy.  The most recent addition to the menu of specialties is the cleft lip and palate surgeries, orthodontia, audiological, speech and psychological therapies for children.

All of which are free including transportation to and from the hospital and family lodging during treatment.  After all, “No Man Stands So Tall, As When He Kneels To Help A Child.”

Shriner’s Hospitals For Children operates completely on donations and thru the interest earned from a Hospital Annuity Fund that the members support in the form of annual dues.

The Shriner’s Hospitals provided speciality care to over 12,200 patients in 2012.

To learn more about the healthcare system, please visit: www.shrinershospitalsforchildren.org

To become a Shriner, please visit: 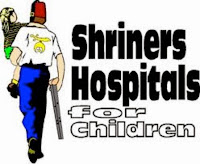 Famous members of the Shrine include, but are not limited to:

Dedicated to Butch.
As a Medinah Aviator he flew children to and from Shriner’s Hospitals for treatment. 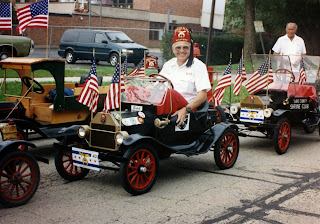 Bro. Brian Schimian is Life of Member A.O. Fay #676 in Highland Park Illinois and the Medinah Shriners - Lake County Shrine Club. He was also the Past Master Counselor of DeMolay - Lakes Chapter in 1995. Brian is a husband and father of two. Bro. Brian is also the lead contributor to the Brothers In Armsblog, a pro 2nd Amendment blog page. "Start Square, Finish Level"