A Lesson In Humility 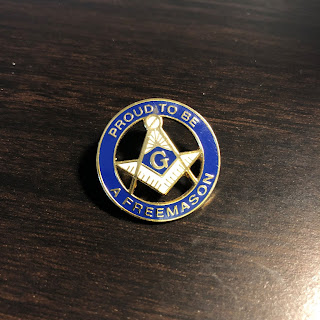 Every once in awhile I "refresh" the pins on my jacket lapels--I have the blue one, the black one, the red one, and a tan one.  I've come a long way since I joined when I didn't even own a jacket.  Anyway, I had been wearing the same pins on those lapels for a long time, so it was time for a change.  I have no shortage of pins.  My wife suggested once that if I changed them every week, I'd have to live to be a hundred to wear them all just once, and I keep bringing them home.

I have a bulletin board where I keep them--Masons tend to collect a lot of pins in their travels and that's the best way I've found to keep them handy where you can see them all.  I ran across this one.  I'm not sure where I got, or how long I've had it, or if I've ever worn it before.  It's from Indiana I noted later, so I probably got it during one my adventures across the state line.  It looked nice on my black suit jacket, so I picked it.

Then I noticed the back of the pin.  And it really took me back. 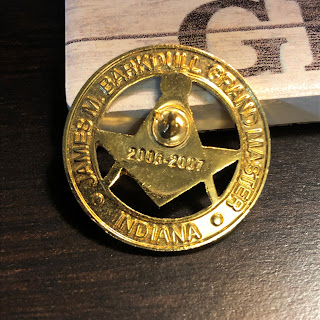 Some Masons get so wrapped up in the trappings of Freemasonry, that they forget the important part of Freemasonry--the teachings.  It becomes all about titles, and rings, and aprons for them (a friend of mine calls Freemason like this "medal collectors").  Their goal of these Freemasons becomes the continual pursuit of the bling and the glory and honor that comes with it (you're thinking of a name right now, aren't you?)

This is a Grand Master pin.  I have a lot of those from many different states.  I think it's pretty rare when a Grand Master designs his pin and doesn't have his name as part of the design on the front.  I don't blame them one bit--a Grand Master in particular serves many, many dedicated years to serve in that role, and I don't fault them at all for enjoying some credit for their hard work.

What really struck me about that Grand Master's pin is that he didn't take that credit.  What you see when you wear his pin is his great pride in his Fraternity--that's it!  I have only one other example of this in my collection--a Grand Master from Illinois from just a few years ago (and a friend of mine).  He did the same thing--he designed a pin that he hoped Illinois Masons would like to wear long after he was out of office to show their pride in the Fraternity.  He made a beautiful pin that celebrated the Fraternity, and put his name on the back.

These two Grand Masters put their Fraternity before their place within it.  They didn't make that pin about themselves, they made it about Freemasonry.  Perhaps they see themselves as just a single link in a long chain, their service as a privilege, and their role as the continuation of a proud tradition.

It's not our position and role in the Fraternity that matters, it's the role of Freemasonry in our lives, our conduct, and our attitudes that matter.  When you wear your Freemasonry on the inside, you don't need to wear anything at all on the outside for people to recognize it.

It's a great lesson to remember as we travel.