On the Road Again: Pekin Chapter #25

On Saturday July 10, 2010, Pekin Royal Arch Chapter #25 will present its 2nd Annual Dinner & Booksigning for Worshipful Brother Todd E. Creason.  Brother and Chef Charles Robertson will be serving another gourmet brunch, that you don't want to miss.  Todd will speak about his books, and American history . . . and he'll be accompanied by a very special guest!

This is a fun event, you don't want to miss.  I'll also be introducing for the first time a new edition of my book that's not yet available yet--it's both Volume I & Volume II in one compact edition.  Hope to see you there.  TEC
No comments: 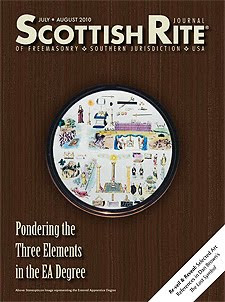 Brother Todd Creason, 32nd Degree, has done it again.  Volume I was a great deal of fun (cleverly disguising a great deal of information).  If anything, the second volume is even better. His narrative style remains the same: devoting short chapters to each person, but starting each chapter with drama, or comedy, or whatever is appropriate to the subject matter.  Just as a teaser, let me quote the opening of chapter 11.

It was a horrific car accident.  He had broken nearly every bone in his body and lost nine pints of blood before he reached the hospital.  One of the firemen on the scene said, "We should have just have put him in a sack."  He was given a one-in-a-thousand chance of surviving . . . He was in a coma for three weeks, swathed in a full body cast with his head covered in a thick layer of bandages. . . .  The doctors feared that he might've suffered brain damage.  They tried everything to revive him to no avail.

On the 21st day of his coma, his neurosurgeon was in the room, checking his chart.  The television set was on.  A famous cartoon rabbit was being chased by a famous cartoon hunter.  Inspiration suddenly struck the doctor.  He leaned over the man and called through the bandages, "How are you feeling today, Bugs Bunny?"

Faintly, from within the mass of bandages, came the muffled reply.  In distinctive Brooklynese, he said, "Eh, Just fine, Doc.  How're you?"

The man, of course was Brother Mel Blanc.  As I've suggested before, these chapters make great Masonic education pieces; short enough to read aloud in Lodge and sure to keep the attention.  Highly recommended.