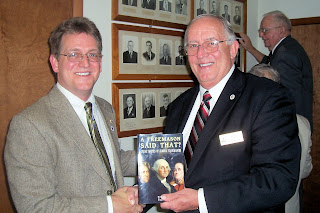 It’s always great fun to visit other lodges, and the trip I made to Mattoon to speak at their Past Master Dinner was especially enjoyable. I was invited by their Worshipful Master, Ken McDonald. Ken is a certified lodge instructor, and we met some months ago when he visited Ogden as an instructor for one of our worker’s clubs. He’s not only a very nice guy, but he’s an excellent instructor—very tough, but it was one of the best sessions I’d ever attended. I couldn’t believe it when he called me a few days later and invited me to speak in Mattoon.

Ogden Lodge Secretary and Past Master, Denver Phelps, accompanied me. He’s not only our Secretary, but also our former District Deputy Grand Master, and our current Assistant Area Grand Master. Denver is a lot of fun on a car trip, so we had lively conversation on the way down and back—and it’s not every day, you can get your AAGM to roadie for you. He helped me haul in books and set up my table.

This event was especially fun because our new Grand Master was in attendance. Grand Master Richard Swaney had just been installed a couple weeks earlier at our Grand Lodge session, so this was one of his first official events as Grand Master. Denver and I got to sit up at the head table with him over dinner, and he’s a lot of fun to talk to. His speech certainly eclipsed mine—his jokes were certainly a lot funnier. He seemed to really like my brand new quote book—I sent him home with the only copy I had of A Freemason Said That? Great Quotes of Famous Freemasons (see picture).

The event was well planned, and well attended. I think that’s my favorite kind of event to speak at, because it’s a way lodges say thank you to their Past Master’s. I noticed in the program, that Mattoon was honoring living PM’s going back to 1958. I met several of them—each a link in the Mattoon Lodge chain that goes back more than 150 years. Mattoon Lodge No. 260 is actually older than the city of Mattoon itself I later read—they were chartered before the city itself. Worshipful Bro McDonald did a great job planning the event down to the last detail—he even had an pianist/organist there who played music written by famous Freemasons—Mozart, John Philip Sousa, Sibelius, Liszt, etc.

I also met a history professor from Eastern Illinois University—Brother Michael H. Shirley. I wish I’d met him two or three years earlier—he would have been an excellent resource to tap when I was researching my books. Definitely somebody I’ll be talking to in the future. Bro. Shirley is also the Leadership Development Chairman for the Grand Lodge of Illinois.

It never ceases to amaze me how you can go into a group of strangers, and because you have one thing in common, being a Mason, you are instantly amongst a group of friends. On the back of the program where listed ten reasons to become a Mason—number three really struck home. It said, “A Masonic Lodge is a place to meet outstanding individuals from all walks of life, that a person would not otherwise have had the opportunity to know and call brother.”