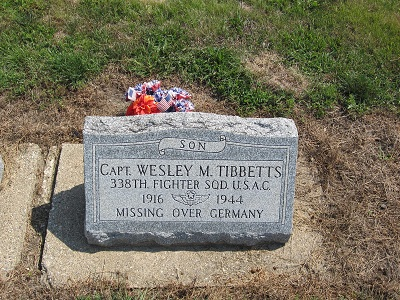 Memorial Day is traditionally observed on the last Monday in May to remember those who died in active military service.  Our fraternity has a long history of members that have died defending our freedom and many who were much more famous than Capt. Wesley M. Tibbetts.
However, Capt. Tibbetts holds a special place of honor in my heart because he was a member of Homer Lodge #199 Ancient Free and Accepted Masons of the State of Illinois when he was shot down over Germany during World War Two.  He was the uncle to our current Treasurer of Homer Lodge #199 and my good friend, Eric Buzzard's wife, Lyna Riggs Buzzard. 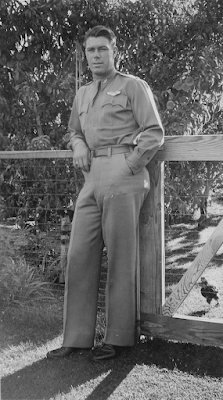 Captain Tibbetts was born October 26, 1916, in Roundup, Montana.  He entered the Army Air Corps at Chanute Field in Illinois as an aviation cadet. Upon completion of his training, he was assigned to the 338th Fighter Squadron, 55th Fighter Group flying a Republic P-43 Lancer. Upon arriving at Nuthampstead, England in October 1943, the unit transitioned to Lockheed's P-38 Lightning ( the 'Forked Tail Devil').

On February 24, 1944, he was flying his 51st mission escorting B-24 bombers that were carrying experimental "non-defusable" bombs when he disappeared. His wingman later stated that he could not remember if they were engaged by enemy aircraft or experienced flak. Luftwaffe records, however, state that the P-38 (42-67752) was shot down by Stabsfelwebel (Sergeant Major) Krausse of 4/JG 11 on this date.

In a letter to Tibbetts' aunt in 1949, a German priest named Heber Kosak stated that he watched an American aircraft get cut off by a German fighter. In the chase that followed, he said that the P-38 lost its tail rudder, a propeller, and then crashed on a farm near Sondra. Munitions on the plane exploded, and the aircraft took 2 days to completely burn.

Tibbett's body was hidden by the priest and some villagers until after the war, and his body was then reinterred at the G.A.R. Cemetery in Homer, Illinois. There is a memorial in Sondra, Germany at his crash site. 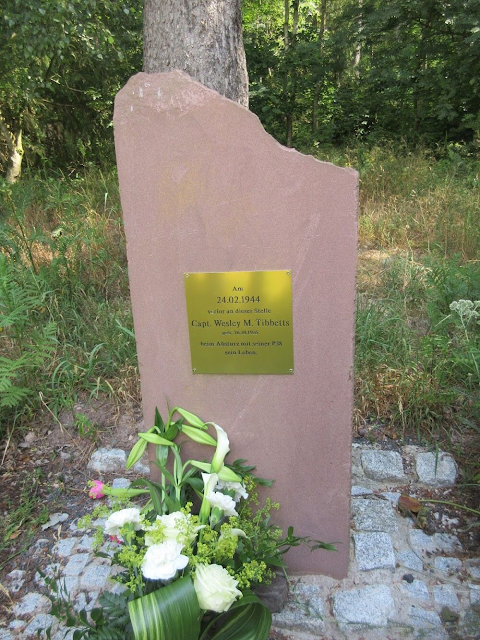 Captain Tibbets was awarded the following:
He was initiated as an Entered Apprentice on September 9, 1941, passed to the degree of Fellowcraft on September 17, 1941, and raised to the sublime degree of Master Mason on September 21, 1941.  Thank You Brother and Captain Tibbets for your sacrifice.
I'm sure every lodge that was created prior to World War Two has its own heroes. This is only one of many that belonged to Homer Lodge #199. On this memorial day, I hope that you take time to remember those members of your lodges that paid the ultimate sacrifice.
~DL
WB Darin A. Lahners is our Co-Managing Editor. He is a host and producer of the "Meet, Act and Part" podcast. He is currently serving the Grand Lodge of Illinois Ancient Free and Accepted Masons as the Area Education Officer for the Eastern Masonic Area. He is a Past Master of St. Joseph Lodge No.970 in St. Joseph. He is also a plural member of Homer Lodge No. 199 (IL), where he is also a Past Master. He’s also a member of the Scottish Rite Valley of Danville, a charter member of Illinois Royal Arch Chapter, Admiration Chapter No. 282, Salt Fork Shrine Club under the Ansar Shrine, and a grade one (Zelator) in the S.C.R.I.F. Prairieland College in Illinois. You can reach him by email at darin.lahners@gmail.com.