Billy Graham: Freemason Or Not? 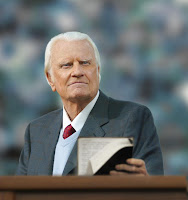 "Give me five minutes with a person's checkbook, and I will tell you where their heart is."
~Reverend Billy Graham

Another person that is often cited as being a Freemason is Billy Graham.  It's hard to say where this rumor began, but as with so many of these cases, the "evidence" seems to be centered on photos of awkward handshakes.
Perhaps part of it was this photo of Billy Graham and Harry S. Truman shaking hands.  Truman was a very active Freemason before, during and after his Presidency, and was the Past Grand Master of Masons in Missouri.  The rumor about Rev. Graham has persisted for years, however, Billy Graham is not a Freemason.  He's made that quite clear, and his organization even released this email nearly fifteen years ago.

Thank you for your e-mail message. We understand your concern about rumors that Mr. Graham is in some way associated with Freemasonry. The reports are erroneous — though we continue to hear them. Mr. Graham is not, has not been and does not expect ever to be involved in Freemasonry. Your help in keeping the record as accurate as possible would be much appreciated.

So that should answer that question beyond a shadow of a doubt.  Billy Graham is not a Freemason.  Period.
~TEC