What Masonic Secrets are the FBI Hiding? 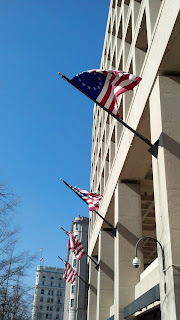 While on a trip recently to Washington DC, I had the incredible opportunity to visit the HQ of the Federal Bureau of Investigation (FBI). The FBI HQ is located at 935 Pennsylvania Ave, NW inWashington DC. The HQ is officially known as the J. Edgar Hoover Building.
Hoover was director of the FBI from 1924-1972. Until July 1, 1935 the FBI was known as the Bureau of Investigation. Hoover was a devoted Freemason and we will touch on this later.

When arriving at the Hoover building, there are multiple layers of screening that take place before you enter. You must be escorted at all times. The building itself was designed in the 1960’s and eventually finished in the early 1970’s and takes up at least 2 city blocks of prime real estate. The FBI has recently put forth a proposal to replace the Hoover building with a new HQ in the DC metro area. 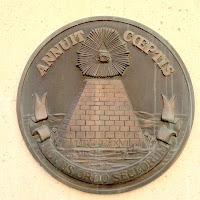 No pictures were allowed except in the outdoor atrium area. It was there that I found some very interesting plaques. The first that caught my attention was a seal with the words Annuit Cceptis. This is of course the backside of the Great Seal of the United States of America. Annuit Coptis means "He [God] has favored our undertakings".
For decades speculation has been that the great seal is a Masonic symbol placed on the dollar bill as a sybol of Masonic domination. After leaving the courtyard we visited the FBI Museum, which features a timeline of events of many of the major cases that the FBI has worked on including the Unibomber, Chicago Gangsters and September 11.

On display are many artifacts associated with the cases. J. Edgar Hoover himself was there in lifesize form as a wax figure. He was standing beside an American flag and wearing his Masonic ring.
So what Masonic secrets were the FBI hiding?


Well perhaps I will truly never know, but the influence of Brother Hoover is still very obvious in the agency today.