"Without thinking too much about it in specific terms, I was showing the America I knew and observed to others who might not have noticed."
—Norman Rockwell
Red Mountain Lodge No. 63, Vermont 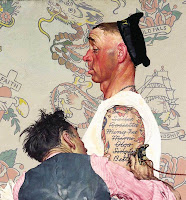 It's an often used expression in America to say that a scene "looks like something out of a Norman Rockwell painting" or to say something like "as American as a Norman Rockwell painting."  The prolific painter created more than 4,000 original works in his lifetime.  While he was still in his teens he received his first commission painting four Christmas cards.  Not long after, while still in his teens, he was hired as the art director of Boys' Life Magazine, the official publication of the Boy Scouts of America.

When he was twenty-two, he was commissioned to paint his first cover for the Saturday Evening Post.  It was an opportunity of a lifetime--Rockwell considered the magazine the "best show window in America."  And he was more than happy to paint 321 covers for the magazine over a nearly fifty year period.  Some of his best-known works graced the covers of the Saturday Evening Post.

In 1943, inspired by a speech by Franklin D. Roosevelt, Rockwell painted the Four Freedoms which were reproduced on the covers of four consecturive issues of the Post along with essays in the magazine from contemporary writers of the day.  The paintings were so popular, they toured the United States, and raised more than 130 million dollars towards the war effort through the sale of war bonds.

In 1977, Norman Rockwell received the highest civilian honor in the United States--the Presidential Medal of Freedom.  He passed away in 1978, but he will long be remembered for his remarkable contribution to art, and for that unique view he shared so generously with America through his work.

Todd E. Creason, 33° is the founder of the Midnight Freemasons blog and continues to be a regular contributor. He is the author of several books and novels, including the Famous American Freemasons series. He is member of Homer Lodge No. 199, and a Past Master of Ogden Lodge No. 754 (IL). He is a member the Scottish Rite Valley of Danville, the York Rite Bodies of Champaign/Urbana (IL), the Ansar Shrine (IL), Eastern Illinois Council No. 356 Allied Masonic Degrees, and Charter President of the Illini High Twelve in Champaign-Urbana (IL).