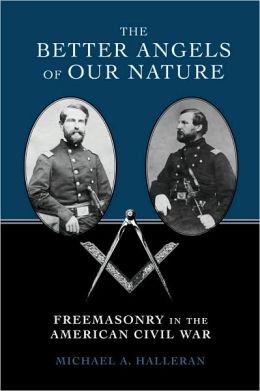 Over a year ago, I reviewed an older book which I found to be just amazing, it was called "A House Undivided" and you can find the review here. Recently I had the pleasure of reading another book which was similar, in that the subject matter was the same. However this particular book "The Better Angels Of Our Nature - Freemasonry In The American Civil War", is not so much a collection of colorful and interesting anecdotes as the previous book had been, but instead a real investigation into these stories and it attempts to verify, using real scholarly work, the claims that many of the stories have perpetuated in the last one-hundred years and that are usually claimed as sacrosanct.

In the first chapter it opens up with a doorbuster, in which using all the resources available, documentation, evidence and even written accounts, dismisses and proves once and for all time that the highly regarded story of Hancock and Armistead, which has been forever memorialized in the "Friend To A Friend" Masonic Memorial at Gettysburg, and is also the basis of the 26th Degree in the Ancient Accepted Scottish Rite of the Northern Masonic Jurisdiction, is false and not only didn't happen but that it could not have happened at all. It's a great story, but it just isn't true.

After that huge disappointing blow, the book goes on and I was fully prepared for more disappointments. But my disappointment was staved off by confirmation after confirmation of amazing stories regarding the influence of the gentle Craft in wartime. In fact, many of the stories which were confirmed were more amazing than any other stories I had heard before. Stories that pulled at your heartstrings and made you really think about the time and situations these Brothers had been in, filled the book from cover to cover.

The book's overwhelming and underlying question or theme seems to be -- "What was it about the Masonic Obligation that superseded the rules of war?". This was a question that the book guides you into asking yourself as you hear story after story of verified fraternalism on the battleground. Stories of soldiers "accidentally" escaping and lodges being fashioned in prison camps and even enemy officers of those prison camps attending the prisoner based lodges are verified through journal entries and cross-referenced in other journal entries by the actual brothers who were there!

And where there seem to be journal entries by brothers verifying these events, there are also journal entries by the profane of the period in which they complain that Masons got better treatment and even were let go on occasion, this to them was unfair. Often times these profane wrote in their journals of how when the time would present itself, they too would join the fraternity out of witnessing the bonds which had been on display to them during the war.

The book does a fantastic job of verifying, separating truth from colorful anecdotes, and disproving Masonic "whoppers". There are so many great stories and parts of this book, I say it's a must-read. Where "A House Undivided" brings you the fairytales, perhaps this book brings you the straight dope on what really happened, and in the end, this book proves we are indeed the greatest fraternity in the world.

Bro. Robert Johnson, 32° is the Managing Editor of the Midnight Freemasons blog. He is a Freemason out of the First North-East District of Illinois. He belongs to Waukegan Lodge No. 78. He is also a member of the York Rite bodies Royal Arch, Cryptic Council, Knights Templar, AMD, The Illinois Lodge of Research and a member of the Scottish Rite Valley of Chicago as well as a charter member of the Society of King Solomon, a charity organization run by the Grand Lodge of Illinois. Brother Johnson currently produces and hosts a weekly Podcast (internet radio program) Whence Came You? which focuses on topics relating to Freemasonry. In addition, he produces video shorts focusing on driving interest in the Fraternity and writes original Masonic papers from time to time. He is a husband and father of three. He works full time in the safety industry and is also a photographer on the side as well as an avid home brewer. He is currently working on a book of Masonic essays.