The Camp: Part One - An Introduction 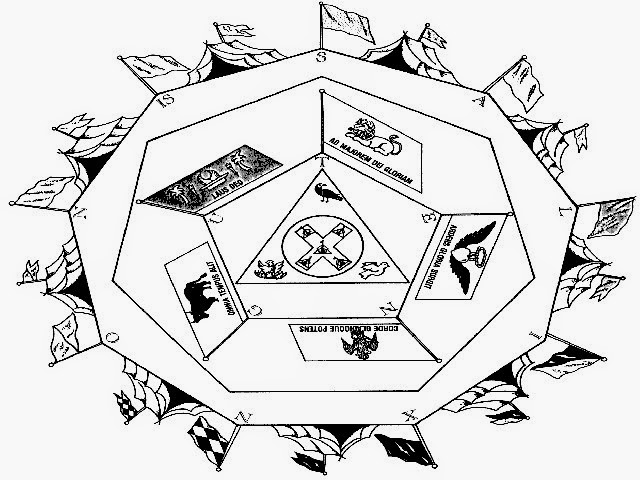 
Of the many symbols within Freemasonry; the Square and Compasses, the letter G for American Masons, the Skull and Crossbones for some of our European Brothers, the Triple Tau, the Double Headed Eagle and even the Cross in the Crown made famous by our Knight Templar Order may pale in complexity to what is said to be the most intricate symbol in Freemasonry, The Camp. I will say this, the Triple Tau is one complex symbol when dissected, it's many meanings unfolding into several parts, however The Camp, when taken apart, could be written volumes on each section. This is the first part in a series of short pieces which will attempt to dissect The Camp into a digestible format.

First, I would like to mention that to many Freemasons, The Camp may not be something they have seen before. Even some members of the AASR (Ancient Accepted Scottish Rite), especially us in the Northern Masonic Jurisdiction may not have seen this, but don't let that stop you from reading. The Camp is called this because on the outside of the symbol are a series of tents set up in an arrangement around a shape. These tents represent encampments of Masons. Or a camp of Masons arranged in a particular order according to the degree being represented.

This first shape is the outer level and is called a Nonagon. It has nine sides and around it there are nine tents. Also each tent has a specific color, letter and banner. The next level in is a shape is a heptagon, followed by a pentagon which is surrounded by banners or "standards". On each one of these banners is a picture. Inside the pentagon is a triangle and in this triangle there are three pictographs. At the next level , is a circle and in the circle is the St. Andrews Cross. So if you break this symbol down into it's various parts you have ;

•    Five shapes; the nonagon, the heptagon, the pentagon, a triangle and a circle. Notice the 3,5,7 and 9.
•    On the nonagon, you have nine camps to which relate to the first 18 degrees, nine colors, nine letters and eighteen duties or lessons associated with it.
•    The heptagon has seven sides.
•    The pentagon has twelve degrees, five letters, five pictograms and twelve lessons or duties ascribed to it.
•    The triangle has two degrees, three pictograms and two lessons or duties associated with it.
•    The circle has but one degree joined to it.
•    The St. Andrews Cross is in the center and alone.

So far I have given you the most basic and intriguing explanation of this symbol and I hope you join me as I continue to take apart this symbol in its many facets over the coming weeks. I hope you enjoyed this very brief and tantalizing look at The Camp. In the next piece we will dive into the nonagon and all its parts. Until then, stay on the level.

Bro. Robert Johnson, 32° is the Managing Editor of the Midnight Freemasons blog. He is a Freemason out of the First North-East District of Illinois. He belongs to Waukegan Lodge No. 78. He is also a member of the York Rite bodies Royal Arch, Cryptic Council, Knights Templar, AMD, The Illinois Lodge of Research and a member of the Scottish Rite Valley of Chicago as well as a charter member of the Society of King Solomon, a charity organization run by the Grand Lodge of Illinois. Brother Johnson currently produces and hosts a weekly Podcast (internet radio program) Whence Came You? which focuses on topics relating to Freemasonry. In addition, he produces video shorts focusing on driving interest in the Fraternity and writes original Masonic papers from time to time. He is a husband and father of three. He works full time in the safety industry and is also a photographer on the side as well as an avid home brewer. He is currently working on a book of Masonic essays.