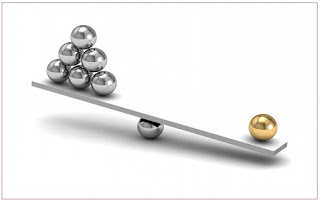 It's an old argument amongst Freemasons--quantity or quality.  Everybody wants more members, so there's sometimes a push to make it easier for a man to become a Freemason.  Lower the standard so that more will join.

Others argue that making things easier cheapens what it means to be a Mason.  Perhaps it's better that it is difficult to become a Freemason, because when you have to work at something, it means more to you.  It means you really want it.

So which argument is correct?

So I understand both arguments; however, for my money, I'll take quality over quantity every time.  Good solid candidates of good report.  Men of honor.  Men who are willing to work.  Men who desire to improve themselves and strive to make the world a better place.  I'd rather add one Mason like that to my Lodge than ten I never see again after his 3rd degree.

Because I have seen what one motivated Mason can accomplish.  I've seen how the Fraternity can change a man for the better.  I've seen how just one inspired and industrious Mason can bring new energy into a lodge.  There's a Lodge near me that would be gone today if it weren't for a new Mason's stubborn determination to save it.  They couldn't even get enough of their members there to have a meeting, and weren't too many meetings away from losing their charter.  He dug his heels in and fought a hard battle for it--and he won.  One new member, then three, then five . . . Today, it's one of the healthiest Lodges in our area, with great leadership, and an enthusiastic membership.  They are always doing something new, and they are always being pointed at as an example.

I see the "quality" argument kind of like a college handing out the bachelor's degree before the student completes the coursework.  No college does that.  First, all the graduates of that college that worked for that same degree are going to be furious.  Secondly, that college gets a bad reputation, and those alumni that worked hard to earn that degree are holding a piece of paper that means a lot less now considering the lowered standards of the institution that issued it.  That's why college's maintain high standards.  That degree must mean something.  It must signify that a graduate worked hard, learned something, and met the standard of the institution.

The things that are most important aren't the things that come easy, they are the things you have to work for.  Because the determination and dedication required to earn that distinction are part of the experience itself.

Todd E. Creason, 33° is the Founder of the Midnight Freemasons blog and continues to be a regular contributor. He is also the author of the From Labor to Refreshment blog, where he posts on a regular schedule on topics relating to Freemasonry.  He is the author of several books and novels, including the Famous American Freemasons series. He is a Past Master of Ogden Lodge No. 754 (IL), and currently serves as Secretary, and is also a member of Homer Lodge No. 199.  He is a member the Scottish Rite Valley of Danville, the York Rite Bodies of Champaign/Urbana (IL), the Ansar Shrine (IL), Eastern Illinois Council No. 356 Allied Masonic Degrees, Charter President of the Illini High Twelve in Champaign-Urbana (IL), and a Fellow of the Missouri Lodge of Research.  He was recently awarded the 2014 Illinois Secretary of the Year Award by the Illinois Masonic Secretaries Association.  You can contact him at: webmaster@toddcreason.org