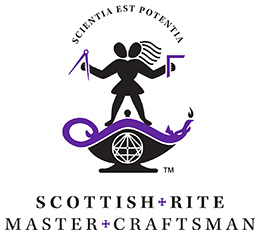 The last time I wrote about the Scottish Rite Master Craftsman Program was a little more than two years ago. It's hard to believe it's been that long. It was right around the time they decided to switch things up a bit. Master Craftsman 1 became part 2, part 2 became part 3 and the new program based on the symbolic lodge (the first three degrees) and using Albert Pike's Esoterika was made into part 1. It made sense, a natural progression of sorts.

Program I: The Symbolic Lodge - What I hope to do next

Program II: Scottish Rite Ritual and History - What I did first, because it used to be part 1

Program III: Scottish Rite Philosophy - What I'm on now because it used to be part 2.

So, two years ago I finished Master Craftsman pt. 1 (now part 2) and surely I'v completed the rest right? Well, I have no trouble telling you that upon completion of the then first installment of the program, (based on the AASR SJ degrees) I bought and sent in for Master Craftsman pt 2, (the deeper philosophy of those degrees - more essay question answers etc.). I was really excited to start it. But...I didn't. It sat in my secretary for a while. How long? What if I told you I just mailed in the first quiz for grading? Yep, that's right. I waited two years to start the damn thing.

It's been a long time and it also took a bit longer to get in the swing of writing essays based on questions that were pretty well constructed to make us explore some of those deep meanings. I wrote out my essays in cursive script on nice paper, folded them up along with my quiz sheet and mailed them in yesterday morning. I have to say it feels good to get that thing back in the mail.

Now I have no idea what they will say when they receive it. Undoubtedly, they will likely laugh at the fact it took me two years (a little more actually), to get the quiz back to them. When I get the next installment, I will try to place a deadline on it, one a month so that I can complete MC2 (now MC3) in a reasonable amount of time. Once I finish this one, I will definitely start MC1, based on Esoterika. I just hope it doesn't take me another 2 years to start it.