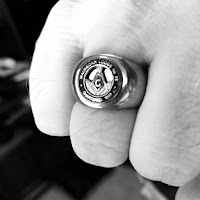 When I became a Freemason back in 2007 (became an EA), I was a hard working guy who worked with my hands, winter or summer, cold or hot. I was outside 8 hours a day, 5 days a week. This is no big deal to many of you reading this, as I'm sure many of you are the same. When I finally became a Master Mason, I was still in that job and I wanted ring, but one that would withstand ANYTHING.

Enter the world of stainless steel rings. The market is flush with them now, but back then, there was really one dude who was the genesis of the trend, Bro. Gordon Spurlock. My lodge had a custom ring with him, and it was only $100. I know, now days, you can get a ring for about $25 if you really want to.

But this one was made by a bro, cut from steel, hollowed, ground, and the individual iconography placed and glued by hand. I liked that touch. I bought it and wore it every day. It had been "gold fired" as well, but that wore off after a year. That thing got beat to hell on the regular. Being steel, it even saved my finger from a few incidents.

About three years ago I started a new gig and started working in the office. I became a little more Masonic, I gained weight. All kidding aside, that ring became too tight to wear. Being steel, I can't resize it either. Insert long story about inspirational healthy living here. I was walking around the house last week and my current ring was noticeably loose. I thought, "Huh, I wonder if my old ring would fit again."

Turns out, it did. I smiled, and kept it on. It's nice to have it back.