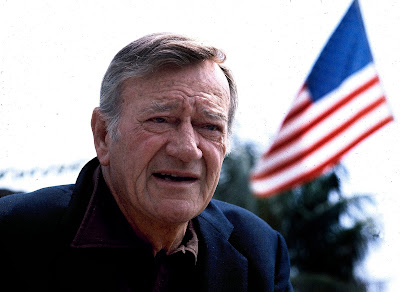 “This is a good country. With good people in it. Good people don’t always agree with one another. Maybe the best thing we can do in this country is agree to disagree every once in a while.”

John Wayne was never shy about expressing his opinions when it came to politics. He was a conservative, and a life-long Republican. He supported candidates that shared his great love of America, and those values that make America great. He was a patriot at heart, and developed friendships with many American Presidents, starting when he campaigned for Eisenhower. Then  Nixon. Ford. Reagan.

His friendship with Richard Nixon was probably the closest. They exchanged letters frequently, and got together on many occasions. Shortly after Nixon won the election in 1968, the Duke wrote to him and said he better watch himself, because he was thinking about running for President himself. Nixon responded, “Duke is a better title than President!”

However, even though he was a Republican, he respected every President that was elected by the people and sat in the Oval Office. He sent a telegram to John F. Kennedy after he was elected saying, “Congratulations, sir, from one of the loyal opposition.” He did the same with Lyndon B. Johnson and Jimmy Carter. Jimmy Carter replied to his telegram, “I trust the only area in which we will find ourselves in opposition is that of Party loyalty. I will need your help in the coming years, and hope to have your support.” Carter invited the Duke to Washington, DC to participate in his inauguration ceremonies, and John Wayne accepted.

When John Wayne died in 1979, it was none other than Jimmy Carter that put what the nation was feeling over the loss of the famous actor into words. He said to the nation, “John Wayne was bigger than life . . . He was a symbol of so many of the qualities that make America great.”

Todd E. Creason, 33° is the Founder of the Midnight Freemasons blog and is a regular contributor.  He is the award winning author of several books and novels, including the Famous American Freemasons series. He is the author of the From Labor to Refreshment blog.  He is the Worshipful Master of Homer Lodge No. 199 and a Past Master of Ogden Lodge No. 754.  He is a Past Sovereign Master of the Eastern Illinois Council No. 356 Allied Masonic Degrees.  He is a Fellow at the Missouri Lodge of . (FMLR) and a charter member of a new Illinois Royal Arch Chapter, Admiration Chapter No. 282.  You can contact him at: webmaster@toddcreason.org