It is with Great Excitement...

Over the past year, I have been able to cultivate a relationship with Robert E. Jackson. I first met him at the 2017 Masonic Con in Attleboro, MA. It was a fantastic event that Ezekiel Bates Lodge had put on for the second time.   Rob and I had dinner together with some other delightful gents and I got to know him. In fact, you may have heard of his temple, Montgomery Lodge in Milford MA, the same lodge that does Brothers Blend Coffee.

Rob and I later connected on Facebook and have since enjoyed great conversation and camaraderie. He's also been able to submit several guest pieces to our blog, right here on The Midnight Freemasons. A list of his writings is below. 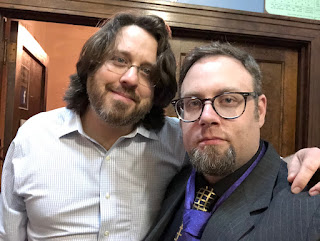 Last Sunday I returned from Massachusetts where I had been a panelist at Masonic Con 2018. It was another amazing event, bigger than last year and even more successful. While there, I got to hang out and chat with Rob again. It was a wonderful time. Rob's dedication to the craft and his unique ability to convey and connect to our readers on a fundamental level have marked him favorably. We are pleased to announce that Robert E. Jackson is going ot be joining us as a Regular Contributor.

Please join me in congratulating him and I hope you all continue to enjoy his works.

The 24 Inch Gauge – Size Does Matter
The Importance of a Meeting
The Journey, Not the Destination of Masonry
There is More to Being a Traveling Man than Pins and Mileage
A Master's Work 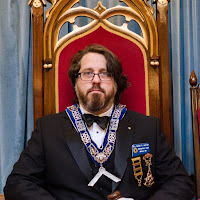