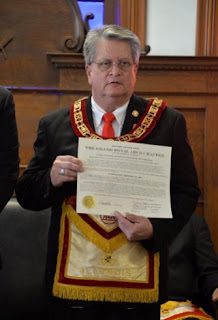 Admiration Chapter No. 282 of Royal Arch Masons received its charter in September 2017. Leading up to this momentous occasion was a series of requirements that had to be met as outlined by the Grand Chapter of Illinois. Having met all those requirements, the Chapter was then granted a charter.

Early in the process, the key founders of Admiration Chapter knew there were some in the Grand Chapter leadership who were skeptical of our efforts. I don’t blame them as I am sure they have seen other groups of well-intentioned companions who wanted to start a new chapter, but just never could get it off the ground.

At Admiration Chapter we did things differently. We deliberately took our time and assembled a group of Companions who were dedicated to a unified goal of completing the work necessary to obtain our charter. But none of this would have happened without leadership within these aspiring Companions.

In 2015, MEPGHP of the Grand Chapter of Illinois, Sean P. McBride granted the group a dispensation to become Admiration Chapter U.D. (under dispensation). When this dispensation was granted, one of the requirements was that a Companion who had previously served as Excellent High Priest (EHP) of another Royal Arch Chapter, serve as the initial EHP of Admiration. Michael J. Dooley, who was a past EHP of Champaign Chapter No. 50 (Champaign, Illinois), stepped forward and agreed to serve in this capacity.

Over the next three years, Companion Dooley did an outstanding job of leading the efforts towards the chartering. First off, Mike lives nearly 50 miles away from where Admiration Chapter meets and thus has a 100 mile round trip just to make the meetings. Mike has never missed any of our degree work, chapter convocations, special meetings etc.

Mike’s leadership style is one of encouragement to others, always putting in a good word for someone, and a willingness to perform any role. He is not one who worries about titles or medals, but rather looking for the growth of both freemasonry and the individual brothers. He is always the first to say “yes I can do that” and is very quick to acknowledge the contributions and service of others. He exemplifies servant leadership.

Let me extend my sincere thanks to Mike for both his leadership and example to others. This fraternity is better because of men like Mike and I have no doubt that his leadership will continue in not only Admiration Chapter but in numerous other places in Freemasonry.

At our convocation last night we had elections of officers for the upcoming year. Admiration Chapter is now in the very capable hands of Midnight Freemason Founder, Todd E. Creason. I foresee continued strong leadership ahead for Admiration.

WB Gregory J. Knott is Past Master of St. Joseph Lodge No. 970 and a plural member of Ogden Lodge No. 754, Homer Lodge No. 199 and Naval Lodge No. in Washington DC.