Holes in the Border - An Interesting Parallel 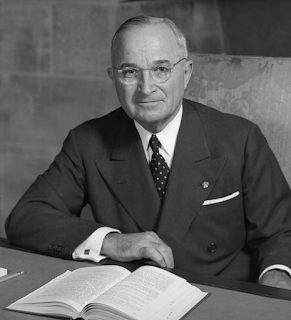 Notice: For the next few minutes, put your politics aside. This is published without comment as a scenario from the past with an interesting parallel to today's current events. Once you have read it, take three deep breaths and count to ten before taking it to FaceBook, Twitter, or other anti-social media platform of choice. Thank you. You may now continue reading the article.

The week of February 19-24, 1947, Freemasons convened in Washington, DC, for a series of combined meetings. On Friday of that week, Frank Land, the founder of DeMolay, arranged for a select group of Brothers, mostly Grand Masters, to meet with President Truman. The meeting was more than a formality, given Truman's interest in Masonic affairs.

Truman greeted the Brothers in the Oval Office, beginning with some informal chit-chat and pointing out some of the items there. He said he was somewhat preoccupied, having just received notice his mother, 94-year-old Martha Ellen Young Truman, had fallen and broken her hip.

The group got down to business and the subject of Truman's impending trip to Mexico came up. Masonic relations between Mexico and the US were good, but there were still issues needing to be ironed out. Chief among those were concerns about some of the Spanish Ritual translations. In addition there were Masonic divisions within Mexico itself.

Truman was to meet with Mexico's President Miguel Alemán Valdés. Alemán was a member of City of Mexico Lodge No. 35 and also a Scottish Rite Mason. They asked Truman if he would arrange for himself and Alemán to meet with a group of Mexican Freemasons in the interest of harmony.

Truman declined, saying his agenda was full. "The sole purpose of my trip," he told them, "is to discuss how to patch up the holes in the Mexico-USA border."