Bro. Leonard “Bud” Lomell and the 75th Anniversary of D-Day 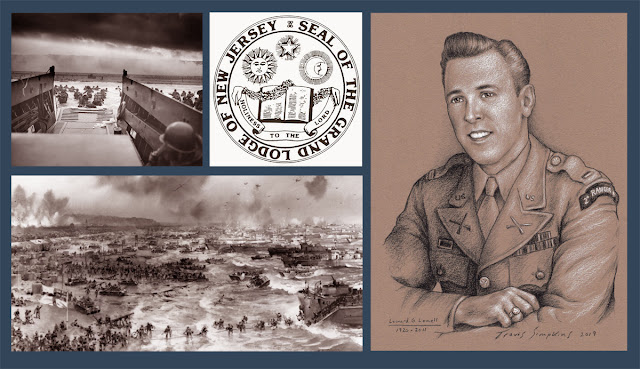 June 6, 1944. D-Day. Leonard G. "Bud" Lomell was a 24-year-old sergeant in the 2nd Ranger Battalion, who were tasked with destroying a battery of German 155mm guns mounted atop Pointe du Hoc in Normandy, France. Although he was shot through the side immediately upon landing, Lomell scaled the 100 foot high cliffs hand over hand on a rope while being fired upon from mortars on the beach. When he reached the top, he discovered that the “guns” they saw is aeral photos were decoys and that the real weapons had been moved inland by the Germans. After searching for and locating the weapons, which had been hidden in a nearby orchard, he used thermite grenades to disable all five guns. Historian Stephen Ambrose credited Bud Lomell as “the single individual – other than Gen. Dwight D. Eisenhower – most responsible for the success of D-Day.” Bud Lomell went on to fight in the Battle of Hurtgen Forest, where he earned a Silver Star for heroism and leadership with his actions in capturing and holding Hill 400. He was wounded again in the Battle of the Bulge before being honorably discharged in December of 1945.

After the war, Bud Lomell returned home to New Jersey. He settled down in Tom's River, where he became an attorney and started a family. He also became a Freemason, joining Durand Lodge No. 179 in Point Pleasant (Raised on March 25, 1946) and the Scottish Rite Valley of Central Jersey. Brother Leonard G. “Bud” Lomell died on March 1, 2011 at the age of 91. In 2013, the Scottish Rite, NMJ posthumously awarded him the Daniel D. Tompkins Award for Distinguished Service.

Back in April of this year, I was having lunch in Atlantic City with some of the Grand Lodge of New Jersey officers. R.W. Robert V. Monacelli, Deputy Grand Master, mentioned that they were planning to dedicate a memorial to Bud Lomell for the 75thAnniversary of D-Day at Fellowship Hall in Burlington, NJ. He asked if I would create a charcoal portrait of Lomell to accompany the memorial and be put on permanent display in the building. I made the portrait pictured above shortly thereafter.

For those in the vicinity of New Jersey, a dedication ceremony will be held this Saturday, June 8th, at 2:00pm. Masonic Fellowship Center – 1114 Oxmead Rd, Burlington, NJ 08016

Travis Simpkins is a freelance artist with clients throughout the United States and Europe. He currently works on projects for the Supreme Council, 33°, NMJ in Lexington, Massachusetts and the Supreme Council, 33°, SJ in Washington, DC. He also serves as a portrait artist for the Grand Lodge of Massachusetts, Grand Lodge of New Jersey and other jurisdictions across North America. His artwork is in many esteemed collections, including the Harry S. Truman Presidential Library & Museum in Independence, Missouri.

Bro. Simpkins is a member of Morning Star Lodge A.F. & A.M. in Worcester, Massachusetts. He is a 32°  Mason in the Ancient Accepted Scottish Rite- Valleys of Worcester and Boston. He is also a member of  Eureka Royal Arch Chapter, Hiram Council of Royal & Select Master Masons and Worcester County Commandery No. 5, Knights Templar.