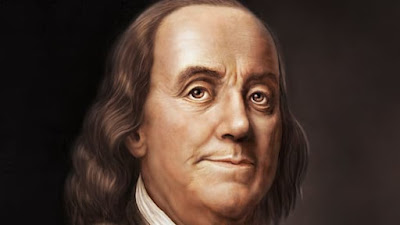 Benjamin Franklin had a particular practice that he established in his 20s and continued to practice throughout the course of his lifetime. He made a list of 13 virtues, printed them on little cards that he kept in his pocket, and each week he focused his efforts on improving himself in one virtue. Each day he kept track of how he did on that week’s virtue on his scorecards, and after he’d cycled through his list he started all over again. Franklin’s 13 “virtues” were temperance, silence, order, resolution, frugality, industry, sincerity, justice, moderation, cleanliness, tranquility, chastity, and humility.

These are frequently hailed as “Franklin’s 13 Virtues” . . . but that’s not exactly what they represent. It’s true that all thirteen of these traits are virtues, however, if you read about Benjamin Franklin, you’ll quickly come to realize that these aren’t Franklin’s virtues—this list represents his vices! After a long look in the mirror, Franklin realized at some point in his youth that his character was in bad need of improvement. He didn’t make a list of virtues he possessed, he made a list of virtues that he needed to work on. And that’s what he did. What’s most remarkable is that he continued working on these for the rest of his life. 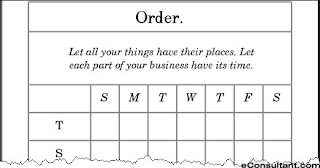 Change is hard, and personal improvement and character development is even harder. As we learn from Franklin’s example, it’s a lifelong pursuit with a goal we never reach. It’s hard because it requires us to look in that mirror and be honest with ourselves. We have to be able to see ourselves as we really are, and recognize where we need work. And there are no shortcuts to building character. It’s very hard work. It requires dedication. It requires sustained determination. It requires self-discipline and self-control.

But as Masons, that’s what we signed on for—to learn subdue our passions and improve ourselves in Masonry. In other words, to learn self-control and self-discipline and begin down the path of becoming a true and upright Mason. To begin seriously working on that ashlar, knocking off all those rough and superfluous parts of our character.

I challenge you to do as Franklin did . . . reflect honestly on yourself, make a list of areas that need improvement, and start down that path to a better you.

A version of this article was originally published by the Scottish Rite Valley of Danville (IL) Valley Echoes Newsletter.