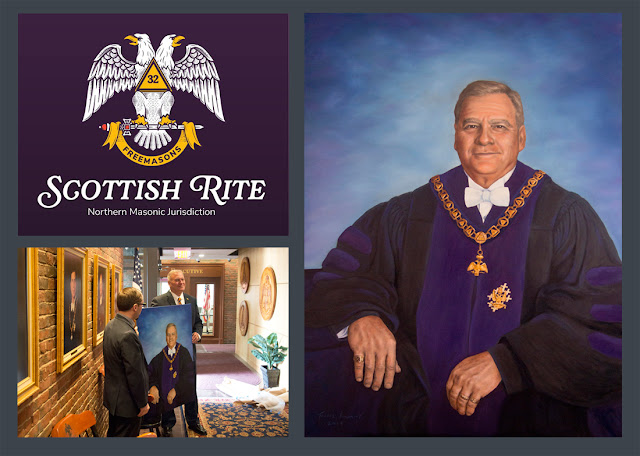 The Scottish Rite Masonic Museum & Library building in Lexington, Massachusetts also serves as headquarters of the Supreme Council, 33°, Northern Masonic Jurisdiction. Beyond the Museum's gallery spaces, which exhibit treasured artifacts of American History, the long hallway of the Supreme Council's administrative wing also contains a very interesting display of art. All along the length of the hall are a chronological series of gold-framed portraits depicting every Sovereign Grand Commander to have served the NMJ throughout it's more than 200 year history, beginning with Daniel D. Tompkins in 1813 and ending with the SGC at the present time. Each portrait is shifted back one spot when the painted likeness of a new leader is made.

After the current Sovereign Grand Commander, David A. Glattly, 33° was installed in the office in 2017, I was given the great honor of adding to this historical tradition when he asked me to paint his official oil portrait. The process of creating the portrait was all the more meaningful for me, as Commander Glattly has been a kind and helpful friend on my Masonic journey from the beginning.

As a portraitist, the most fulfilling aspect is in knowing that the work is appreciated by the recipient. When the painting was unveiled for Supreme Council staff, the look of warmth and happiness on Commander Glattly's face was an indication that I had done the task well. Of all the hundreds of portraits I've created over the years, I count this one among those of which I am most proud.

The Scottish Rite Masonic Museum & Library is open Wednesday through Saturday from 10:00 A.M. to 4:00 P.M. However, it is best to plan ahead and arrange a guided tour.