Aztlan Lodge No. 1 in Prescott, Arizona 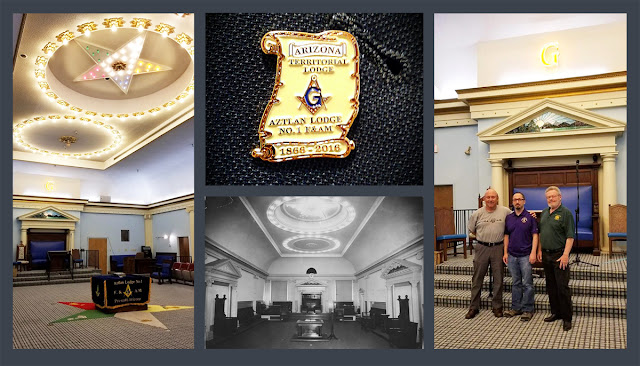 On a recent trip to the Southwest, I accepted an invitation from Wor. Ken Davis to visit Aztlan Lodge No. 1 in Prescott, the oldest Masonic Lodge in Arizona. Located in a commercial area on Willow Creek Road, the plain exterior of the modern building veils the fascinating history contained therein. Wor. Ken and the Lodge's current Worshipful Master, Wor. Ted Gambogi, graciously provided a tour of the building and relayed much of the Lodge's long history.

Aztlan Lodge No. 1, chartered in 1866, actually pre-dates the Grand Lodge of Arizona by 16 years. The Lodge applied for dispensation from the Grand Lodge of California in 1865. The petition required a recommendation from the nearest Lodge to Prescott, which happened to be about 400 miles away in Santa Fe. The weathered document (which is on display in the current Lodge) was relayed on a rugged journey by horseback and returned a year later. Once formed, the first official meetings of Aztlan Lodge No. 1 were held in the log cabin of the Territorial Governor.

The early Brethren had to contend with all the dangers and hardships of the frontier and their first Masonic burial was for a Brother killed during an attack by Indians. Aztlan Lodge's Master in 1872, Morris Goldwater (uncle to future U.S. Senator Barry Goldwater), who went on to become Grand Master of Masons in Arizona, later let the Lodge meet on the upper floor of his business in downtown Prescott until funds were raised to construct a dedicated Masonic building. The first Masonic Temple in Prescott, a grand edifice which stills stands today on Cortez Street, was constructed in 1907.

The four-story building was utilized for over 70 years, but with no elevator an aging membership eventually found the steep flights of stairs to be too arduous. The Lodge sold the Cortez Street building in 1979 and purchased a then-undeveloped large tract of land where the current Temple now stands. Surrounding lots were sold to various businesses to further finance the construction and provide for future upkeep. As a centerpiece within the new building, and a very noble historical tribute, an exact recreation of the 1907 Lodge room was constructed on the second floor.

The Masons in Prescott are doing great work. In addition to Aztlan Lodge No.1, the building is also home to Golden Rule Chapter No. 1 (the oldest Eastern Star Chapter in Arizona), three York Rite bodies, a Scottish Rite study group and a newly formed DeMolay Chapter.

Special thanks to Wor. Ken Davis and Wor. Ted Gambogi for their kindness and hospitality.

More info about Aztlan Lodge No. 1 is available on their website www.aztlanlodge.org
~TS