Museum of Masonic Culture at the Grand Lodge of New Jersey 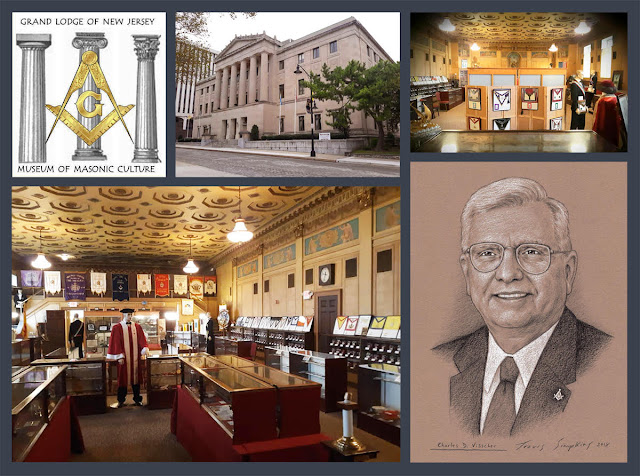 History pervades every cobblestone of Barrack Street in Trenton, New Jersey. As the name suggests, standing on one side of the street is the Old Barracks utilized by British and Hessian troops from 1758 up until the Battle Trenton on December 26, 1776, at which point General George Washington and the victorious Continental Army took control of the area. Diagonally across from the Old Barracks stands a small stone building, built in 1793, which served as the original Grand Lodge of New Jersey. And in between those structures (at 100 Barrack St.) is the magnificent Trenton Masonic Temple, constructed in 1926, which is the current home of the Grand Lodge of New Jersey as well as the Museum of Masonic Culture.

Last month, I was driving back to Massachusetts from a business trip in Philadelphia and passed through Trenton along the way. I had contacted R.W. Glenn Visscher, the Curator of the Museum of Masonic Culture, and he kindly agreed to meet my wife and I there to give us a tour of the historic Trenton Masonic Temple. I had first become aware of the Museum in 2018, when I was commissioned to make a charcoal portrait of the late Charles D. Visscher, the original Curator. He was Glenn's father. Caring for the collection has become a passionate legacy within the Visscher family. Glenn's mother, Barbara, and his sister, Karyn, both help operate the Museum as well.

After passing through the large doors on Barrack Street and seeing the ornate lobby, banquet hall, Library and administrative area, we headed upstairs. The second floor houses three large Lodge rooms. The first is utilized by a few different Blue Lodges, next there is the impressive Ionic Hall of the Grand Lodge of New Jersey. Then, the far end of the level contains a third (former) Lodge room and several adjacent ante-rooms, all of which provide a wonderful backdrop to display the collection of the Museum of Masonic Culture.

Cases in the hallway contain a stone from the White House presented by President Harry S. Truman to the Grand Lodge of New Jersey, the original 18th Century deed for the Temple's land, a cannon ball from the Battle of Trenton and a Masonic apron worn at the funeral of George Washington. A few connecting rooms with various displays lead to the entry of the main museum room, named in honor of Charles D. Visscher (with my portrait of him and a plaque hung beside the door). The main gallery contains a comprehensive, all-inclusive collection of historic and contemporary regalia from Blue Lodges and the various appendant bodies (including Prince Hall Affiliated bodies). There is everything from DeMolay and Eastern Star items to Scottish Rite (NMJ and SJ), York Rite, Allied Masonic Degrees, Shriners and the leather biker gear of the Widows Sons.

Of particular note are an entire display case devoted to Astronauts that were Freemasons and a collection of rare artifacts related to the earliest days of Freemasonry in the State, including the first minutes of the Grand Lodge of New Jersey from 1786. There is something to see at every turn and it is extraordinary work on the part of the Visscher family to have assembled and maintained such a vast collection. I spent about an hour or so looking around and I'm sure I'd notice many new things on a return trip.

Special thanks to R.W. Glenn Visscher for his hospitality and to the entire Visscher family for their noble efforts in preserving Masonic history for posterity.