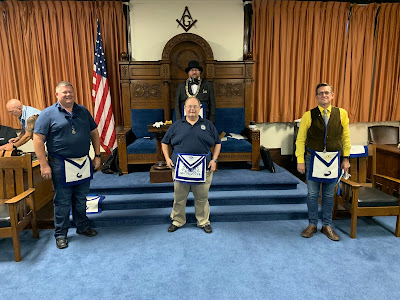 From Left to Right: Greg Knott, Bill Hosler, Darin Lahners (Back), Todd E. Creason
Every Freemason knows that feeling. That feeling when you are out in public, often with your wife or partner and another Mason will approach you and mumble a couple of words, and the next thing you know both of you are smiling and shaking hands and talking. A few minutes later your significant other will ask you ”Does he belong to your lodge?” and you reply back ”Nope. Never met him before.” It’s a feeling that even though you never met the man before you share something in common that makes you feel like you have known him all your life. It’s not something you can explain and seems weird to others but it is a special thing between brothers.

Not long ago, I had the opportunity to visit Saint Joseph Lodge #970 in Saint Joseph Illinois. The lodge is located in a century old building that meets about a coffee shop in the downtown area of a small town full of shops, restaurants and a winery in main street America. It’s a vital part of this beautiful little town near Champaign.
As wonderful as the town was the real reason I was visiting this lodge was to finally meet in person several of the Brethren I have been working with for over a half decade. 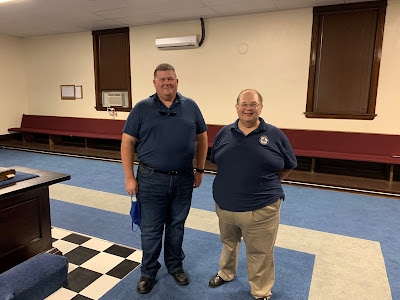 Greg Knott and Bill Hosler
This little town is where I was to meet Midnight Freemasons and fellow co-hosts of the podcast Meet, Act and Part, Todd Creason, Greg Knott, and Darin Lahners. After all these years we were all physically going to be in the same room and attend the same lodge together. I was excited since this is only the second time I’ve met a Midnight Freemason in real life since I met Steve Harrison when he drove through my little Oklahoma town a few years ago. 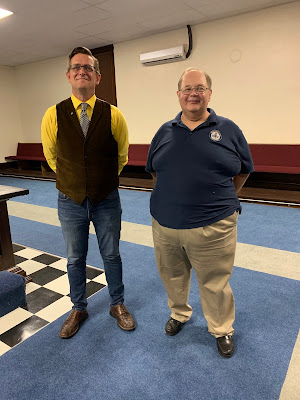 Todd E. Creason and Bill Hosler
That afternoon, Greg Knott picked me up at my hotel and after meeting Darin, we had a great dinner outside at Roch's where I was able to try a local Illinois delicacy called a ”The Horseshoe” (Google it). We spent a great meal talking and laughing after the meal was done we walked the half block to the lodge building. 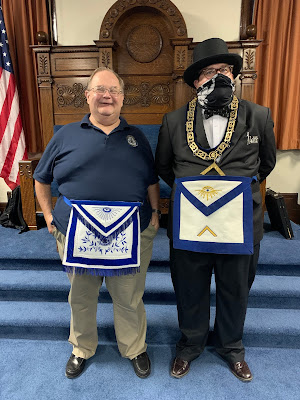 Bill Hosler and WM Darin Lahners
Since Darin is the Master of the lodge this year I watched him open the lodge, while Greg and Todd served as Stewards for the evening. As always when you visit a foreign jurisdiction you look for the differences and similarities to the ritual you learned.
Once the business of the lodge had been completed, Worshipful Brother Lahners asked me to approach the East. Brother Lahners presented me with a lodge lapel on Saint Joe had commissioned during the year Greg Knott was Master of the lodge and Saint Joe had the honor of winning the Mark Twain Award for Excellence in Masonic Awareness. It was a beautiful pin and I will keep it as a souvenir and as a reminder of such a great evening. 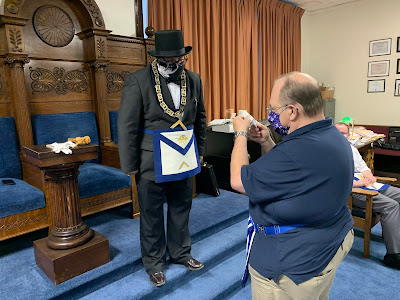 WM Lahners presents Bill Hosler with a lapel pin
After the meeting, the group of us stood in the parking lot and talked for a little while. Discussing future plans for the podcast and the possibility of getting us all together in one place for a symposium type meeting. It’s amazing how we all work together, for years now connected by light and fiber optic cables all over from our locations all over the work the transformational real life was seamless. As if we all have been next door neighbors for decades.

One thing we all agreed on the time we all had together was too short and we would all have to get together again very soon.  Much like the line in the Tyler's toast used in English festive boards ”Happy to meet, sorry to part, happy to meet again.”
~BH