Book Review: To Kingdom Come by Will Thomas 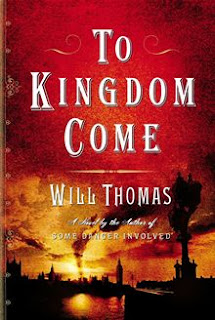 I've been down the better part of four days with the flu, and other than losing about five pounds, there's not much good that came out of the experience.  However, I did get a lot of reading done.  One of the several books I read over the past week was Will Thomas' second Barker/Llewelyn book.  I really enjoyed the first one, and I was hoping the second would be just as good.  I wasn't disappointed.
For you Freemasons, there was an interesting "initiation" into a brotherhood of Irish loyalists that takes place during the story I think you may find a few parts of familiar. To date, there are five Will Thomas novels in this series, and I'll definitely get around to reading them all.  It's great escapist fiction set in Victorian London.  I'd highly recommend it.
From the Publisher:
Victorian enquiry agent Cyrus Barker and his young assistant Thomas Llewelyn first introduced in Will Thomas's critically acclaimed debut novel Some Danger Involved are back with a new mission in To Kingdom Come . When a bomb destroys the Special Irish Branch of Scotland Yard all fingers point to the increasingly brazen factions of Irish dissidents seeking liberation from English rule. Volunteering their services to the British government Barker and Llewelyn set out to infiltrate a secret cell of the Irish Republican Brotherhood known as the Invisibles. Posing as a reclusive German bomb maker and his anarchist apprentice they are recruited for the group's ultimate plan: to bring London to its knees and end the monarchy forever. Their adventures take them from an abandoned lighthouse on the craggy coast of Wales to the City of Light where Llewelyn goes undercover with Maire O'Casey the alluring sister of an Irish radical. Llewelyn again finds himself put to the test by his enigmatic employer as he is schooled in the deadly science of bomb making. Fraught with explosives secret initiations and vicious stick fights and featuring historical figures such as Charles Parnell and W. B. Yeats To Kingdom Come is a riveting sequel to Some Danger Involved .

Email ThisBlogThis!Share to TwitterShare to FacebookShare to Pinterest
Labels: Book Reviews, Will Thomas