House of the Temple: Restoration Project

﻿﻿﻿﻿
﻿﻿﻿﻿﻿﻿﻿﻿﻿The Scottish Rite Southern Jurisdiction has announced plans to do a major renovation of the House of the Temple in Washington, D.C.  The building has stood as a monument to both architecture and Freemasonry for nearly a century.  The renovation will include plans to structurally improve the building, improve building access for guests, preserve thousands of books, documents and artifacts in the Temple Library for future generations (including their copies of the Famous American Freemasons series I hope), and restore the building's impressive furnishings, stone, wood, and ironwork.

The House of the Temple in Washington, D.C. been called the most beautiful building in the world, and was praised as "the high-water mark of achievement."  The building was designed by John Russell Pope, and it was Pope's first monumental commission.  It earned him a Gold Medal from the Architectural League of New York along with many other accolades.  He went on to design the National Gallery of Art West, the National Archives building, and the Jefferson Memorial.
﻿ 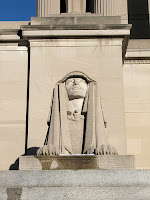 The building is stunning inside and out, from it's massive edifice towering 130 high, surrounded by columns and topped with a magnificent stepped pyramid roof.  The front entrance is flanked by two massive stone Sphinxes, each carved from a single limestone block of Indiana limestone--each of these massive blocks originally weighed upwards of 89 tons.  The artist that carved them was famed sculptor Adolph A. Weinman, who designed several famous United States coins, including the Walking Liberty and Winged Mercury coins.
The interior is just as impressive, and is inspired by both Greek and Egyptian influences.  It is a masterpiece of design, from the awe-inspiring Atrium with it's beige Tavernelle marble from France, inlaid with black marble from the Greek Isle of Tinos, to to the Grand Staircase, flanked by Egyptian statues carved from black marble, which were also sculpted by Adolph a. Weinman.  Perhaps the most incredible of the interior spaces is the Temple Room.  Massive in size, with a domed roof towering eight stories above.
﻿﻿﻿﻿﻿﻿﻿
﻿ It's good to know that through this huge renovation project, the House of the Temple will stand for generations more to enjoy, not only as an example of architecture, and a repository of rare books and knowledge, but as a testament for the positive influence Freemasonry has had on the world.

Author's note: I found most of the information for this piece in the January/February issue of the Scottish Rite Journal, an issue dedicated in full to the House of the Temple's history and the restoration project.  The Scottish Rite Journal is published monthly by the Southern Jurisdiction, and it is a magazine I look forward to reading each month.  If you'd like to subscribe, you can do so by contacting them at journal@scottishrite.org
TEC