USS Lexington: The Blue Ghost Serves As A Blue Lodge 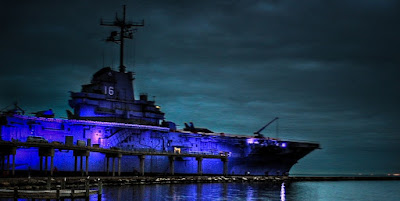 ﻿﻿The names are iconic--Enterprise, Yorktown, Intrepid, Ticonderoga, Hornet, and of course Lexington. Legendary ships of the Navy. These ships have fought for our freedom in many different eras, in different forms, and in different wars all over the world.

One of the most famous, is the USS Lexington, and she served America in many incarnations.  She started as a brigantine during the American Revolution, served as a gunboat during the American Civil War, and  was later resurrected as one of America's first aircraft carriers (although originally designed as a destroyer).  That USS Lexington (CV-2) was sunk during the Battle of the Coral Sea in 1942, and quickly replaced with the ship that soon became legendary.  The last USS Lexington (CV-16) was an Essex-class aircraft carrier, and would soon be known as "The Blue Ghost."  She served between 1943 and 1992.  And the USS Lexington is still around today. 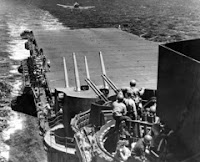 Like a few more of the famous ships from World War II, Lady Lex now serves as a floating museum in Corpus Christi, Texas. If you've never had a chance to visit one of these World War II aircraft carriers, it is well worth the trip.  You'll find the USS Yorktown at Patriot's Point in Charleston Harbor, South Carolina. You'll find the USS Hornet at Alameda Point, California, and the USS Midway at San Diego.  They have lived long lives, many serving later in Korea, and Vietnam, and many other places across the globe in the years since World War II.  If you take the time to visit, it's something you're not likely to soon forget.

I've visited a few of these remarkable ships over the years, most recently, Valerie and I visited the USS Yorktown.  Each time I visit one of these remarkable ships, I am amazed by the sheer size of them, awed by their history and the fact they survived the punishment that was inflicted on them during World War II and the wars they've seen since.  I'm also inspired by the dedicated men that served on them (more than 225,000 sailors served aboard the USS Midway alone during her long career).  Visiting one of these ships is a rare opportunity to touch history in a unique way.  To walk across decks that were raked by the guns of Japanese Zeros.  To see scars still visible even after repairs from torpedoes, and Kamikaze attacks--and knowing the cost in lives on both sides of the war. 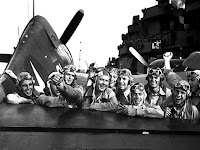 On Saturday the 30th of April On Saturday, April 30th, Oso Naval Lodge No. 1282 in Corpus Christi, Texas will confer the Master Mason degree aboard the U.S.S. Lexington.   It's the first time a Masonic degree has been performed on board the aircraft carrier since she was docked in at Corpus Christi in 1992.
Imagine what it would be like to receive your third degree in Masonry aboard such a historic ship?  Or even attend that degree?  Whether watching the degree or receiving it, I'll bet nobody ever forgets the degree aboard the legendary "Blue Ghost."