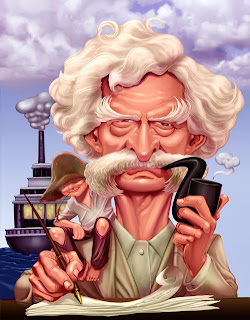 "There are basically two types of people. People who accomplish things, and people who claim to have accomplished things. The first group is less crowded."
~Mark Twain
Polar Star Lodge No. 79
St. Louis, MO
We all know that blowhard that never stops bragging about the things he does.  How much money he makes.  How many good works he does.  How much he donates to charity.  They are all over the internet.  He's the guy the spends more time talking about the volunteer work he does than actually doing any.

I grew up being taught that true charity was something you didn't brag about.  It was something that should be done quietly because it's not really about you.  It's one thing to bring attention to an important cause (I do that all the time), but it is quite another to use that cause to advertise what a wonderful person you are.

Every year around this time, we read about gold coins found in Salvation Army buckets.  We read about some anonymous secret Santa that gives away thousands of dollars, a hundred dollar bill at a time, to needy people.  We don't know who those people are because they don't do it for themselves, they do those things because its something they believe in.  I think that's what I like about Freemasonry--the fact much of the work Fremasons do nobody ever sees.  That's the true spirit of giving--not that jerk that posts on his Facebook "Hope you all enjoyed the football game while I just spent three hours serving meals to the homeless."  Oh, brother.

Yesterday marked what would have been Mark Twain's 176th birthday.  It wouldn't take a genius to figure out that he's one of my favorite authors as much as I quote him on The Midnight Freemason.  There are three great sources of American wisdom when it comes to finding quotes--there's Mark Twain, Benjamin Franklin, and Will Rogers.  Those are my "go-to" guys when I need a good one.  And of course, all three of those men were Freemasons.
~TEC