In 2007 I was raised to be a Master Mason. On my first business meeting, I heard the voice of our endowment committee, at that time it was Brother Harvey.  Brother Harvey was a very old gentleman who was always at the lodge, always involved with his church and always had good conversation.

About two years after I had been in lodge, I believe I was JR Deacon at the time, he stopped coming to lodge regularly. His wife had passed and he decided to move to an assisted living facility a bit too far to drive. We thought of him often and many Brothers went to visit him much of the time. 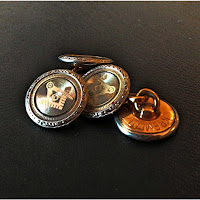 Two months ago Brother Harvey passed to the Lodge on High. It was a sombre time for the lodge. I attended the funeral which was held at his church. I found out then that Harvey was a Scottish Rite Mason as well. He was a member of the Valley of Chicago, the same as I had joined and in fact one of those who was honored this year at the Valley of Chicago's Feast of the Paschal Lamb.

The following meeting at our lodge, our Secretary Bro Carl brought in some of Harvey effects that his family believed we should have. It was a treasure to us. There were pins, cufflinks, books and tie bars. The Brothers there went through some things and when it came to me, our WM said honor Bro Harvey and take something. So I took a simple pair of cufflinks. Old in style yet shiny like new.

I wore those cufflinks to the 2013 Valley of Chicago Scottish Rite Spring Reunion. Harvey had never been to the new building that the VOC had built. While I was eating lunch a Brother asked me about these unique cufflinks, and I told him who they belonged to. He said well I guess Brother Harvey made it here after all and grabbed my hand. I have a feeling that this Brother knew brother Harvey and knew that I wore them for him since he couldn't be there.

It was an odd moment realizing that the last time these cufflinks were worn in the VOC, they were worn by a different man and in a different building. He was a just and upright Mason, Brother Harvey.

Sir Knight Robert Johnson, 32° is the editor of the Midnight Freemasons blog.  He is a Freemason out of the First North-East District of Illinois. He belongs to Waukegan Lodge No. 78. He is also a member of the York Rite bodies Royal Arch, Cryptic Council and Knights Templar, and a member of the Scottish Rite Valley of Chicago.  Brother Johnson currently produces and hosts a weekly Podcast (internet radio program) Whence Came You? which focuses on topics relating to Freemasonry. In addition, he produces video shorts focusing on driving interest in the Fraternity and writes original Masonic papers from time to time. He is a husband and father of three. He works full time in the safety industry and is also a photographer on the side as well as an avid home brewer. He is also working on two books, one is of a Masonic nature.