What is the Masonic Society?

Like many newly raised Freemasons, I was seeking to learn as much as I could about the fraternity.  I spent hours poring over internet sites and reading digitized books of old masonic works.    One night I came upon The Masonic Society (TMS).   The Masonic Society was just getting started, having been formed by a prominent group of Freemasons from around the world.  There were many familiar names such as Christopher Hodapp, Brent Morris, Robert Lomas and Rex Hutchens.
The group had developed a website and was inviting perspective members to join.  The only requirement was to be a Master Mason within a lodge recognized by the Conference of Grand Masters of North America.   I filled out the on-line application and became a Founding Member of The Masonic Society in 2008.
So exactly what is the purpose of TMS?  As stated on their website:
“A significant group of passionate Masons have joined together to create what is now the fastest growing research society in Freemasonry. Called simply The Masonic Society, we are brothers who have a deep and abiding desire to seek knowledge, explore history, discover symbolism, debate philosophies, and in short, who are at the forefront of charting a path for the future of Freemasonry.” 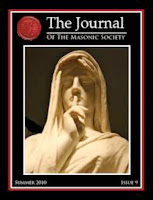 What are the benefits of joining such an illustrious group?  Your membership fee includes one of the finest Masonic Journals in existence today – The Journal of the Masonic Society.  This journal features original written articles on the history of freemasonry, masonic philosophy, news from happenings in the craft, etc.   The current Editor is Michael Halleran who follows Christopher Hodapp, who retired earlier this year.
Additionally you qualify to join the on-line TMS forum.  This forum contains a wealth of information that has been contributed by some of the most active brothers in Freemasonry today.   Have a question?  Put up a post and you will have your questions answered shortly. 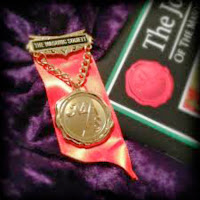 TMS holds an annual meeting at Masonic Week and their hospitality room is the place to be to meet brethren from around the world.   The conversations are excellent and the drinks aren’t too bad also.
TMS is now celebrating their fifth year and as a special gift to new members, TMS is offering a special fifth anniversary jewel.  This jewel was designed by John Bridegroom, who creates amazing masonic works.
I am extremely proud to be a part of this group of Brothers.  The knowledge I have gained has been invaluable in learning more about the craft.
Find The Masonic Society on the net at www.themasonicsociety.com, you will be glad you joined.

~GJK
WB Gregory J. Knott is the Past Master of St. Joseph Lodge No. 970 in St. Joseph (IL) and a plural member of Ogden Lodge No. 754 (IL), and Homer Lodge No. 199 (IL). He's a member of both the Scottish Rite, and the York Rite, and is the Charter Secretary of the Illini High Twelve Club in Champaign-Urbana. He's also a member of the Ansar Shrine (IL) and the Eastern Illinois Council No. 356 Allied Masonic Degrees. Greg is very involved in Boy Scouts--an Eagle Scout himself, he serves the Grand Lodge of Illinois A. F. & A. M. as their representative to the National Association of Masonic Scouters.