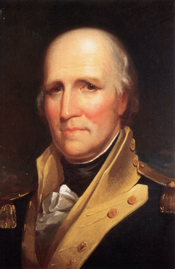 Born in Virginia in 1752, George Rogers Clark spent his early boyhood on a farm just a few miles from Thomas Jefferson's Monticello.  At the age of 20, he moved to Kentucky where he garnered a reputation as a military leader.  He began his career as an Indian fighter and later in life gained the friendship and respect of the Native Americans who had been his former enemies.  He is considered a hero of the American Revolution, where the greatest of his accomplishments was to capture the British-held forts of Kaskaskia, Cahokia, and Vincennes.

After his military service ended, Clark received 150,000 acres of land for his contribution to the war, but he struggled to maintain it.  Unsuccessful at this, he lost most of the land and opened a small gristmill in Clarksville, Indiana, which provided a moderate income.  In 1805, he was named to the board of directors of the Indiana Canal Company, whose mission was to build a canal around the nearby Falls of the Ohio River.  His good fortune at obtaining this position didn't last long.  Two of the other directors, including Vice President Aaron Burr, illegally plotted to seize Louisiana from Spain in order to open the Mississippi River to Americans.  In the process, $2.5 million of the company's money ($65 million in today's dollars) turned up missing.  Clark was not involved.  Burr and the other director, Davis Floyd, were arrested for treason and the Indiana Canal Company folded.

A grisly incident in 1809 turned Clark into an invalid for the remainder of his life.  Age 57 at the time, he suffered a stroke and fell into an open fireplace.  He was unable to move and his leg burned so badly it required removal. When his doctor performed the amputation, the only "anesthetic" Clark received was music from a fife and drum corps playing in the background.

Clark lived with the crippling effects of the stroke and amputation until his death in 1818.  Like his famous brother William (of Lewis and Clark fame), George Rogers Clark was a Freemason.  Although his original Lodge is unknown, Abraham Lodge #8, Louisville, conducted his Masonic funeral.

Steve Harrison, 32° KCCH, is a Past Master of Liberty Lodge #31, Liberty, Missouri.  He is the editor of the Missouri Freemason magazine, author of the book Freemasonry Crosses the Mississippi, a Fellow of the Missouri Lodge of Research and also its Senior Warden.  He is a dual member of Kearney Lodge #311, St. Joseph Missouri Valley of the Scottish Rite, Liberty York Rite, Moila Shrine and is a member of the DeMolay Legion of Honor.