The Midnight Freemasons Blog page has grown by leaps and bounds. At this time we would like to announce the eleventh regular contributor to the Midnight Freemasons. Brother Bill Hosler, PM was made a Master Mason in 2002 in Three Rivers Lodge #733 in Indiana. He served them as Master in 2007 and became a member of the internet committee for Indiana's Grand Lodge. 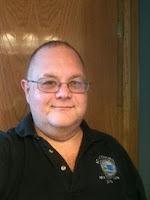 Bill is currently a member of Roff Lodge #169 in Roff Oklahoma and Lebanon Lodge #837 in Frisco,Texas. Bill is also a member of the Valley of Fort Wayne Ancient Accepted Scottish Rite in Indiana. A typical active Freemason, Bill also served as the High Priest of Fort Wayne's Chapter of the York Rite #19 and was commander of of the Fort Wayne Commandery #4 of the Knight Templar. During all this he also served as the webmaster and magazine editor for the Mizpah Shrine in Fort Wayne Indiana.