A fraternity that performs so many charitable acts is bound to be the target of fraud.  Those impersonating Masons for financial gain and those appealing to Masonic charities under false pretenses have been around almost as long as the order itself.  Today, with the Internet and mass media, word can spread quickly when a charlatan surfaces.  In times past, such communication was slower and more difficult.  In 1859, Rob Morris, founder of the Eastern Star, published "The Prudence Book." Updated annually, it was an attempt to publish information about impostors, but was discontinued after a short run.  It was found easier to print and distribute "broadsides" as Lodges discovered impostors.  Here is an example of one notice warning Lodges of an impostor from the 19th century.  It reads (sic): 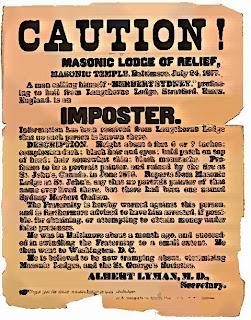 calling himself "HERBERT SYDNEY," professing to hail from Langthorne Lodge, Stratford, Essex, England is an IMPOSTER.  Information has been received from Langthorne Lodge that no such person is known there. DESCRIPTION. Height about 5 feet 6 or 7 inches: complexion dark: black hair and eyes: bald patch on top of head; hair somewhat thin: black mustache. Professes to be a portrait painter, and ruined by the fire at St. John's, Canada, in June 1876. Reports from Masonic Lodge at St. John's, say that no portrait painter of that name ever lived there, but there had been one named Sydney Herbert Gadsen. The Fraternity is hereby warned against this person, and is furthermore advised to have him arrested, if possible, for obtaining, or attempting to obtain money under false pretenses. He was in Baltimore about a month ago, and succeeded in swindling the Fraternity to a small extent. He then went to Washington, DC. He is believed to be now tramping about, victimizing Masonic Lodges, and the St. Georges Societies. ALBERT LYMAN., M. D., Secretary.

Steve Harrison, 32° KCCH, is a Past Master of Liberty Lodge #31, Liberty, Missouri. He is the editor of the Missouri Freemason magazine, author of the book Freemasonry Crosses the Mississippi, a Fellow of the Missouri Lodge of Research and also its Senior Warden. He is a dual member of Kearney Lodge #311, St. Joseph Missouri Valley of the Scottish Rite, Liberty York Rite, Moila Shrine and is a member of the DeMolay Legion of Honor.