The real secret of success is enthusiasm. - Walter Chrysler 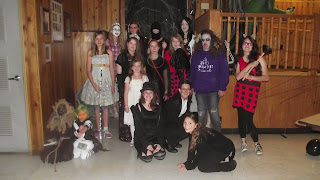 I have written several stories about my involvement with Job’s Daughters. You see, I have been involved with this great organization since I have been three years old. I was my aunt’s flower girl for her Honored Queen’s installation. In my mind, I was the best flower girl EVER! But if you should talk to her, I am sure she would give you a different story.

Just recently our Bethel (#55 Pekin) had a prospective party (inviting young ladies to learn about our organization). We invited another bethel (#111 Elmwood) to join us and they brought prospective members as well. This was also a Halloween party so a prerequisite was a costume. If not, a donation to H.I.K.E. would be made. The Master of Empire lodge #126 was the judge for the costume party and he was impressed that both Bethel's worked together and were enthused with what they doing.

Of the six prospects that came to the party, two have been initiated already (#55); and one girl that has been initiated has a petition filled out and she hasn’t even been to her first meeting after initiation!!! She was so impressed with our bethel that she asked a friend to join us. Now that is what I call enthusiasm!!!

Enthusiasm comes from the top and works its way down. As I see local bethels grow, the girls notice the enthusiasm from their Bethel Guardian and the council members. If they have enthusiasm, the girls will catch it and you will see the bethel grow.


As you can see these young ladies are so enthusiastic, I wish I could bottle and sell it!!
Get excited, show your enthusiasm, be proud, I am!!!!

Judy Gordon is very active in Job's Daughters. She's the Past Honored Queen, and Past Bethel Guardian of Bethel No. 55, Pekin (IL). She received the Cryptic Masons Masonic Youth Leadership Award along with her husband, Ray Gordon in July 2007. She's also Past Matron of the Morton Chapter No. 974 (IL) of the Order of the Eastern Star and Historian of the Emblem Club No. 424 of Pekin (IL). Judy is the recipient of the Degree of Royal Purple (2012) and elected to the Grand Line Illinois Job's Daughters (2015-16). Boaz joined the family in September 2013 and grandmother of 3 wonderful grandsons.