Dr. Conrad Murray: Freemason Or Not? 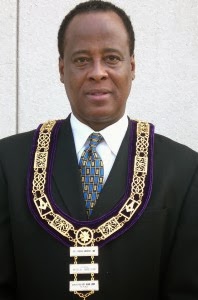 On June 25th, 2009, the world received some shocking news--Michael Jackson, the "King of Pop" was dead at the age of fifty.  Once the shock of the news subsided, what the world wanted to know was why and how the pop star came to such an untimely end.  And all eyes began to focus on Michael Jackson's personal physician--Dr. Conrad Murray.  Without question, Michael Jackson was using some very powerful drugs, including the surgical anesthetic propofol administered by Murray.  Murray ultimately was found guilty of involuntary manslaughter and sentenced to four years in prison--he was released after serving two.

During the trial, the above photo was released by Murray's attorney, and the press went wild with the news that Murray was a Freemason.  According to the information provided, Murray is the Grand Medical Director of the United Most Worshipful Scottish Rite Grand Lodge of Texas, A.F.&A.M.
﻿
This evidence satisfied the press of his Masonic credentials, and the story was repeated over and over again that Murray is a Freemason.  But most Masons will see the problem almost immediately with both his title and the Masonic organization he belongs to. There is simply no such title as "Grand Medical Director."

The United Most Worshipful Scottish Rite Grand Lodge of Texas is one of many phony Masonic organizations that are out there today (or what Masons would call clandestine organizations).
So back to the original question.  Is Dr. Conrad Murray a Freemason?
No, he is not.