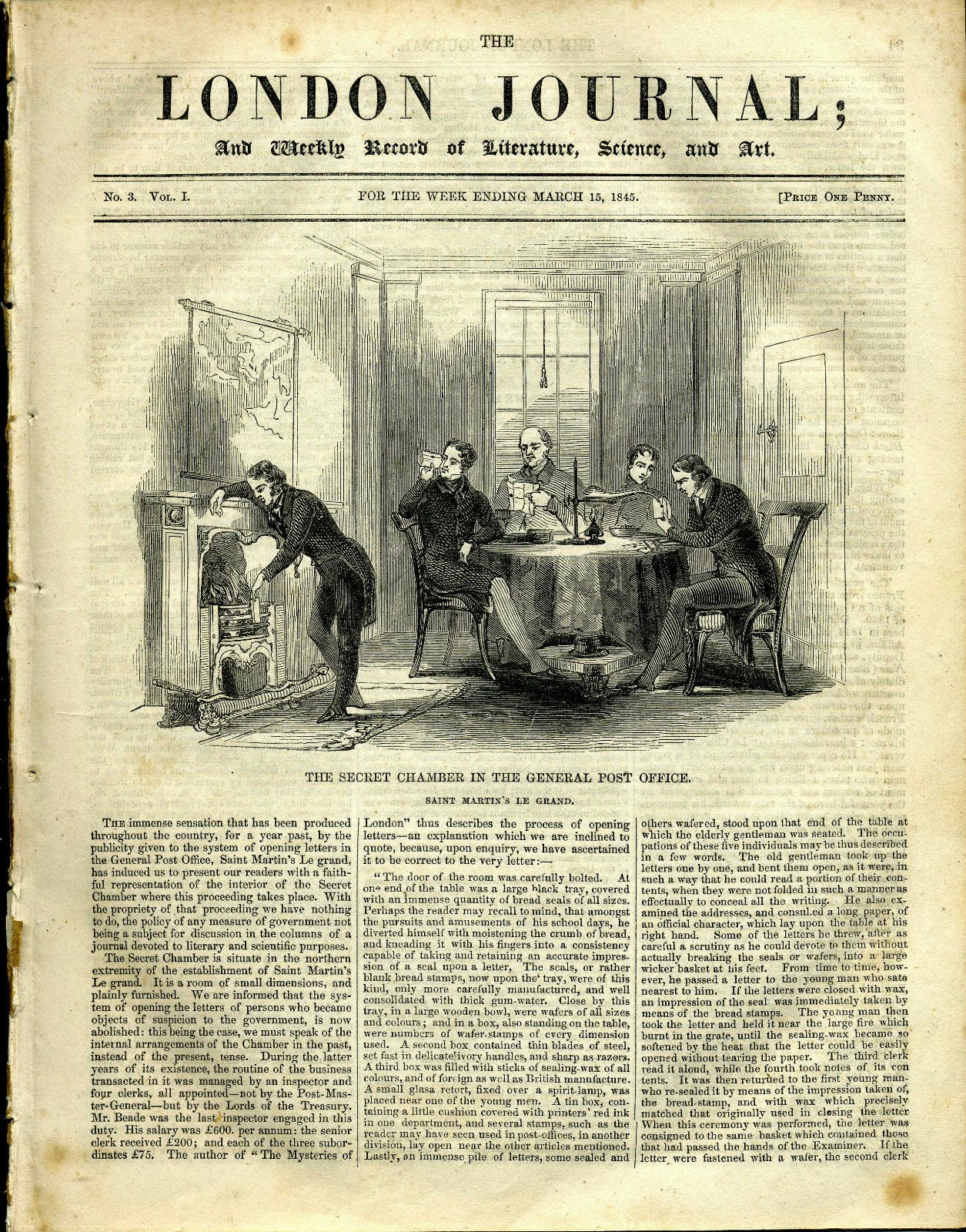 I admit it: I’m an eBay addict. I’ve bought a ridiculous number of things on the site, including about 80% of my masonic bling, and all in all it’s been a great experience. I don’t buy much any more, but I still keep my eye out for things, including any object related to the guy I wrote my doctoral dissertation on: George W. M. Reynolds, the noted radical journalist, novelist, and rake. He was a prolific author and editor, and I like to at least have the chance to say no to things he might have had a connection with. These days, I mostly stick with copies of  The London Journal, a weekly newspaper he edited. Not long ago, an alert popped up in my inbox that a copy of The London Journal, dated March 15, 1845, was listed for an $8 opening bid. It was nothing special, I thought, and then I noticed one of the keywords: “Freemasonry.” So I bid on it, and since I’m likely the only person in the world who pays attention to listings for The London Journal, I won it.

The article in question is entitled, “Revelations of Freemasonry, By One of the Initiated.” It is not an exposé in the scandalous sense of the word, but a fairly straightforward examination of what Freemasonry is, how it’s organized, and how business and work are conducted. “The Chief design of the establishment,” The author writes, “is to rectify the heart, inform the mind, and promote the moral and social virtues of humanity, decency, and good order, as much as possible in the world….” It gives a fairly detailed account of a degree, including the oath, and while I’m no expert in English Work, it’s quite recognizable to a modern American Freemason. I’m not going to give any secrets away here, but a few things in the article are worth sharing without violating my own oath; they might prove instructive for modern Masons to compare with their own experience. First, dues were about 20 shillings a year, payable quarterly, a total equivalent to about $1300 a year today. Second, that level of dues didn’t have a negative effect on membership, it seems: typical lodge attendance is given as fifty to sixty, with meetings beginning at seven in the evening in winter, and nine in summer (I’ve been to enough lodges without air conditioning to appreciate the wisdom of that late start time). Finally, when the degree is over, the Master sits down at the altar and proposes a toast to the new Brother, which is drunk to great applause by all assembled. I can think of a few Brothers of my acquaintance who would welcome that practice as a worthy addition to degrees here.


The article was well worth the money, not only for the peek into 1845 English Freemasonry it provided, but for the new question it’s prompted me to ask: was Reynolds himself a Freemason? I doubt it, for he was a scandalous man, but assumptions about history have a way of producing foolishness, so I’m going to see what I can find out. It would add a new chapter to my dusty dissertation, and might lead me down research paths I haven’t yet thought of. In the meantime, I’ll keep looking for Reynolds ephemera wherever I can find it, especially on eBay. I have an addiction to feed, after all.