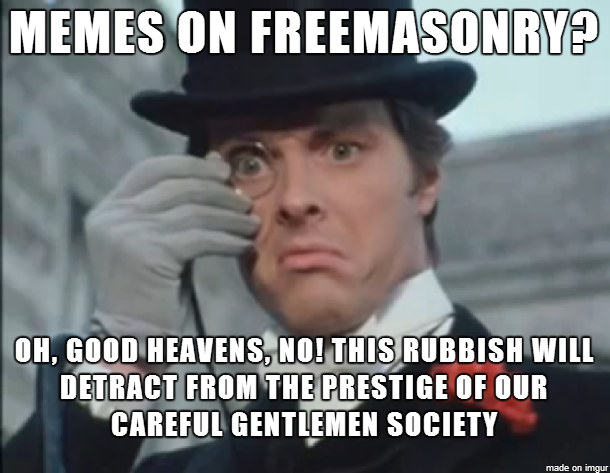 Memes with a Masonic twist. Some say they are disrespectful to the craft, well, what's your opinion? Are they? I personally can't get enough of them. I have known of and used them for quite some time and for those not familiar with the term, it is simply defined as the following:

The word meme is a shortening (modeled on gene) of mimeme (from Ancient Greek μίμημα.

A meme (/ˈmiːm/ meem)[1] is "an idea, behavior, or style that spreads from person to person within a culture."[2] A meme acts as a unit for carrying cultural
ideas, symbols, or practices that can be transmitted from one mind to
another through writing, speech, gestures, rituals, or other imitable
phenomena with a mimicked theme.

Basically, if you use Facebook, you have seen them and have probably shared them. For the most part they are funny but can be political at times. So, full disclosure here I do not know how to use Reddit at all, but every Monday they have Masonic Meme Monday. Some love them, others hate them and still even more say "they are destructive to the craft". So again, I love Masonic Meme Monday, and I repost them all the time. There is rarely one that one is created that doesn't bring me to tears. Here are my favorites and the ones which make me laugh every single time I see them, even posting them now I am chuckling.

I hope they make you laugh and to remember there is humor in everything, especially within our craft. Here is the best of "Masonic Meme Mondays", at least in my humble opinion. As we have so fittingly expressed, The Midnight Freemasons is the "Lighter" side of Freemasonry, or at least we try to be. Please enjoy the slide show below. If your browser or mobile device won't load the slide show, click HERE and it will take you to the album!


Many thanks to WB. Nick Johnson of The Millennial Freemason for turning me on to this hilarious phenomenon!


Bro. Robert Johnson, 32° is the Managing Editor of the Midnight Freemasons blog. He is a Freemason out of the First North-East District of Illinois. He belongs to Waukegan Lodge No. 78. He is also a member of the York Rite bodies Royal Arch, Cryptic Council, Knights Templar, AMD, The Illinois Lodge of Research and a member of the Scottish Rite Valley of Chicago as well as a charter member of the Society of King Solomon, a charity organization run by the Grand Lodge of Illinois. Brother Johnson currently produces and hosts a weekly Podcast (internet radio program) Whence Came You? which focuses on topics relating to Freemasonry. In addition, he produces video shorts focusing on driving interest in the Fraternity and writes original Masonic papers from time to time. He is a husband and father of three. He works full time in the safety industry and is also a photographer on the side as well as an avid home brewer. He is currently working on a book of Masonic essays.