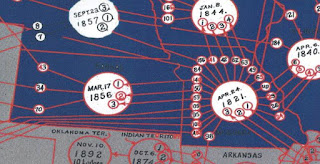 The first time I saw it hanging in the Grand Lodge building in Columbia, Missouri, I thought, "That is the most complex, convoluted, confusing thing I have ever seen."  It was also captivating.  That "thing" is a large map of the United States as it existed in 1939.  In other words, there is no Alaska or Hawaii and, for some reason, it also lops off the bottom part of Texas (given the traffic I've encountered in Houston, I've often thought that might be a good idea).

The map's title reveals it to be the "Genealogy of Masonic Grand Lodges of the U.S., prepared by George B. Clark, Denver, Colorado, September, 1926, revised September 1939."  The Masonic Service Association published it the same year.

The individual states are colored either blue or gray, with concentrations of the blue states mostly in the midwest and west coast.  The Great Lakes are an appropriate aqua color.  Michigan's Upper Peninsula is also aqua, giving one the impression it may have been submerged at the time.

There is a large circle inside or (in the case of the smaller New England states) near each state.  In the blue states, the circle is filled with white.  In the gray states, the circle is gray with a red border.  Also inside most states is a series of smaller circles with the same color scheme.  Finally, in a master stroke of chaotic genius, a network of red lines connects the large and small circles.

It's an exquisite mess.

In simple terms, the map shows the origins of each Grand Lodge along with the individual Lodges that formed it.  Using my own Grand Lodge as an example (it's all about me, of course), here's how it works:

In other words, the Grand Lodge of Missouri chartered Missouri Lodges 140, 150 and 153, all located in Kansas.  Then, when Kansas became a Grand Lodge on  March 17, 1856, those Lodges became, respectively, Kansas Lodges 1, 2 and 3.  For the record, those were Kansas Lodges Smithton 1, Leavenworth 2 and Kansas 3.

This intricate map shows the same information for each Grand Lodge in the continental United States.  You can follow the history of your own Grand Lodge by clicking on the accompanying link.

The Rest of the Story

The map is a patchwork of color: blue states, gray states, red lines and so on.  Some of the smaller circles connect to other circles with black numbers or red numbers or, in some cases, both black and red.  There is no accompanying key to explain the meaning of those and other color variations.  Without such indications I was quite curious to find out what all of the complex coloring meant.

I called MWB Richard Fletcher who, at the time, was Executive Secretary of the Masonic Service Association.  "I have the original map here," he told me, "and there are no colors on it."

Hitting that dead end, I called RWB Ronald Miller, who was the Grand Secretary of the Grand Lodge of Missouri.  "We created that map," he said, "for our Masonic Museum.  The consultant we hired for the project told us colors have more impact, so they were added for that reason.  The colors are random... they have no meaning."

Disappointing, but it just goes to show the old adage is true: "A camel is a horse designed by a committee..." or a consultant trying to justify an outrageous fee.

*The Grand Lodge of Missouri recognizes April 21, 1821 as its official organization date.  Historical documentation indicates the brothers did not assemble until Monday, April 23, 1821, and did not have a quorum until April 24, when the actual business of the meeting and election of Grand Officers took place.

Bro. Steve Harrison, 33°, is Past Master of Liberty Lodge #31, Liberty, Missouri. He is the editor of the Missouri Freemason magazine, author of the book Freemasonry Crosses the Mississippi, a Fellow of the Missouri Lodge of Research and also its Worshipful Master. He is a dual member of Kearney Lodge #311, St. Joseph Missouri Valley of the Scottish Rite, Liberty York Rite, Moila Shrine and a member and Past Dean of the DeMolay Legion of Honor. Brother Harrison is a regular contributor to the Midnight Freemasons blog as well as several other Masonic publications. His latest book, Freemasons: Tales From the Craft & Freemasons at Oak Island. Both are available on amazon.com.