So, my wife and I went to see Captain America - Civil War and it's no secret this new movie involves of course, Captain Steve Rogers AKA Captain America and Bucky, AKA The Winter Soldier. About twenty minutes into the movie, I remembered something I wrote a few years ago before I was involved with the Midnight Freemasons. 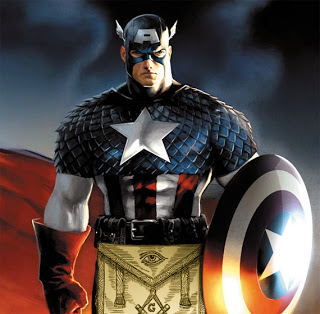 Thinking about the success of the comic series and of course recently the movies, there is something just so "stand-up" about Steve Rogers AKA Captain America. And then there is this quote from the Comic book --The Ultimates #7: Cap (Steven Rogers) is chatting with his old sidekick (who has grown old, while Cap has been frozen). Bucky says, "So why don't you come down to The Lodge on Friday? You remember Donnie Hudson? He's seventy-five this weekend and all the old crowd are throwing him a roast." Gail interrupts, "Oh, never mind about all those silly aprons and secret handshakes, Steve."~ Taken from www.wcypodcast.com May 30th, 2012.

Bro. Robert Johnson, PM is the Managing Editor of the Midnight Freemasons blog. He is a Freemason out of the First North-East District of Illinois. He is the Secretary of Waukegan Lodge No. 78 and Education officer for the 1st N.E. District of Illinois as well as a past member on the Grand Lodge Education Committee. He is also a member of the York Rite bodies, AMD, The Illinois Lodge of Research and a member of the Scottish Rite Valley of Chicago as well as a charter member of the Society of King Solomon, a charity organization run by the Grand Lodge of Illinois. Brother Johnson currently produces and hosts weekly Podcasts (internet radio programs) Whence Came You? & Masonic Radio Theatrewhich focus on topics relating to Freemasonry. In addition, he produces video shorts focusing on driving interest in the Fraternity and writes original Masonic papers from time to time. He is also a co-host of The Masonic Roundtable, a Masonic talk show. He is a husband and father of four. He works full time in the executive medical industry and is also a photographer on the side as well as an avid home brewer. He is currently working on a book of Masonic essays.