Did Freemasonry Evolve From The Jedi Knights?

I began researching the question, and once I started looking for it, the evidence began to pile up almost immediately.  I noticed how often terms like "Apprentice" and "Master" and "Knight" had been used in the movies. And of course there's the Jedi Council that meets in the Temple--and they have a Grand Master, Yoda, who was a source of great wisdom, enlightenment and leadership.  And Yoda even looks a lot like some of our Past Masters today!

Then there's the stark symbolism of darkness and light. The emphasis of staying on the more difficult enlightened path, and not being seduced by the dark side. The goal of becoming a better man. The idea of old mentors of the Craft helping apprentices learn traits and skills that enable them to be a force of good in the world.  Then Darth Vader chops off Luke's hand, then later Luke chops off Darth Vader's hand--that's obviously got a York Rite connection somewhere in the murky past.  All very strangely Masonic.

And then there are the Jedi levels that obviously evolved into the Degrees and levels we know today:

Master Jedi--  well duh, that should be obvious.  Once they get to this point they can start wearing their Master Jedi rings and put the emblem on their X-Wing Fighters.  Luke Skywalker welded his ring right onto his android hand so he wouldn't lose it.

Jedi Knights-- The precursor of the York Rite

The Jedi Grand Master--Yoda sat in the East

Then there was the big annual Convocation where all the Jedi Masters came together and had a meeting, then enjoyed a few nice dinners together at a fancy hotel and pretended they didn't know the Jedi Nobles causing a ruckus across the street in the Cantina.  Vendors were set up in the basement where the Jedi Masters could buy belt buckles, key-chains, and cufflinks with their well-known symbol on them--the crossed light sabers and blaster.  They might even buy a nice sweater for the family dog that says "My Master is a Jedi Master."

So did Freemasonry really evolve from the Jedi Knights?

Of course it did. 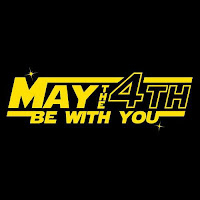 Todd E. Creason, 33°, is the Founder of the Midnight Freemasons blog and is a regular contributor.  He is the author of several books and novels, including the Famous American Freemasons series. He is the author of the From Labor to Refreshment blog.  He is a Past Master of Ogden Lodge No. 754 (IL), and currently serves as the Secretary, and is also a member of Homer Lodge No. 199 where he serves as Senior Warden.  He is a member the Scottish Rite Valley of Danville, the York Rite Bodies of Champaign/Urbana (IL), the Ansar Shrine (IL), Eastern Illinois Council No. 356 Allied Masonic Degrees, Charter President of the Illini High Twelve in Champaign-Urbana (IL), and a Fellow of the Missouri Lodge of Research.  He is a charter member of a new Illinois Royal Arch Chapter, Admiration Chapter U.D.  He was named the 2014 Illinois Secretary of the Year Award by the Illinois Masonic Secretaries Association.  You can contact him at: webmaster@toddcreason.org