Will You Stand Up? 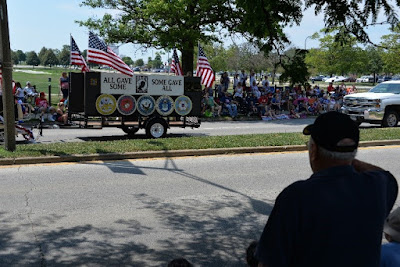 Like many other American’s, I spent part of July 4th attending a parade.  It was a parade with marching bands, politicians, fire trucks, police cars, and lots of American flags.

An older gentleman was sitting in front of me and he was wearing a ballcap that identified him as a Veteran of the Korean War.   He was by himself and when an American flag went by, he would rise out of his chair and salute the flag as it went by.  It wasn’t an easy task as he used a cane to assist himself getting up.

I went up to shake his hand and said a “thank you for your service”.   He was most appreciative of my acknowledgement.  As I shook his hand, I couldn’t help but noticing he was wearing a Masonic ring.

I asked about his ring and told him I was a Freemason.  He said he was a member of Deland lodge in a nearby rural town and a member of the Valley of Bloomington (IL) Scottish Rite.  It was fun meeting and having that instant connection with a brother through the fraternity.

Seeing his dedication and devotion to the flag and the country for which it stands, made the parade all that more meaningful.  It was a simple reminder of the great sacrifice that our men and women have made in 241 years in keeping the United States a free country.