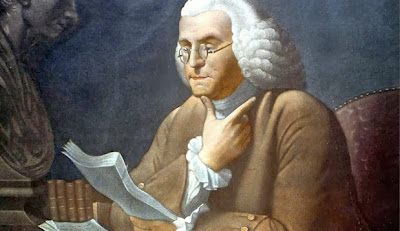 Benjamin Franklin very much wanted to join St. John's Lodge, but at that time, you had to be invited to join the Freemasons.  He had a difficult time getting invited to join, and he hadn't been subtle in dropping hints that he'd like to join.  He valued many of the same values the Freemasons respected.  Much like Franklin, the Freemasons were dedicated to civic works and fellowship.  They held a nonsectarian policy about religious toleration which mirrored his own beliefs.  And without question, Franklin also saw membership as a step on the social ladder.

In hopes of currying favor with the Freemasons, he began to publish small, favorable pieces about the Freemasons in his newspaper.  But that didn't work, so he tried a slightly different tactic.  In December of 1730, he published a long article in his paper claiming to have uncovered some of the secrets of the Freemasons.  He claimed one of these secrets was that many of the so-called “secrets” were actually hoaxes.  And he claimed he would begin publishing those "secrets" in a series.

That got their attention!

Within a couple of weeks, Benjamin Franklin was initiated into the St. John’s Lodge.  Shortly after his initiation, his newspaper printed a retraction of the article and put in its place a glowing piece about the positive influences of Freemasonry.