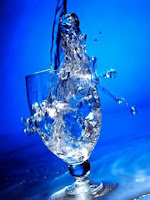 You ever get that rare feeling that the stars and planets have aligned and you're flowing in perfect unison with the universe around you?  It comes along rarely, and it's usually right before all hell breaks loose, but that's been the way my week has gone.  My cup runneth over this week.  I've been riding a wave.  But this morning was the best!
This morning, on my way to work, this woman in her big honking SUV gets right on my butt.  It's a two lane highway, and she can't pass me.  She's so close to my bumper all I can see is her grill.  I'm not exactly putting along--I was doing 65 mph on a 55 mph road.  So I slow down five miles per hour.  She backs off, and I can see she's cussing and swearing, and making rude gestures.  Then she swoops right up on my ass again.  I slow down another five miles an hour to the speed limit (see that's my advantage, I always leave early so I don't have to drive like a lunatic to get to work on time.  I could stop and fish for an hour on my way to work, and still be there on time.)  That makes her really mad, and she lays on the horn.  Although I don't usually, about that time I came up to one of the little towns along that route, and I thought it was a good idea to slow down to the posted speed limit of 45 mph, the entire time, she's holding her horn down inches off my bumper.  She can finally pass me, and she roars around me, flipping me off as she went.  Real nice lady.
That'd already made my day.  Five miles down the road, it was my turn to pass her.  She was pulled over.  The cop was standing at her window writing her a ticket.  I honked and waved at her--the look on her face was priceless.