The Beer Summit: A Conversation with Author Todd Creason

﻿﻿﻿Todd Creason is the author of several books about famous Freemasons in American history. A Freemason himself, Todd’s series Famous American Freemasons has become as popular with non-Masons as it is with Masons. He considers writing a hobby, and works as a Business Manager at the University of Illinois. But his books continue to grow in popularity.
I met Todd several years ago in Chicago in a television station green room as we were waiting to be interviewed for a Newsmakers segment for CNN Headline News. It was pretty obvious to me that Todd Creason was somebody that had a very unique way of seeing the world. Within a few minutes, we were laughing so hard a studio employee asked us to keep it down and shut the door. When I saw Todd had a new novel One Last Shot he was promoting, I knew he’d be an entertaining subject to interview. I wasn’t wrong about that. He sent me a copy of the book, and a few weeks later, we met outside of Danville, Illinois in a local bar called The Little Nugget.  I recognized the bar instantly as The Beer Chaser, one of the fictional settings from Todd's novel One Last Shot. 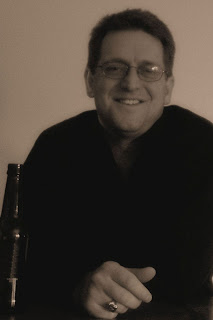