King’s Chapel was founded in 1686 as an Anglican congregation with loyalty to the King of England and over the years it grew and needed a new building.  In 1754 the current building was completed and was made of Quincy granite.  Over the years it went dark, converted to a Unitarian Congregation and finally to the current independent congregation affiliated with the Unitarian Universalist Association.  The governance system consists of elected officers, Senior and Junior Wardens, Treasurer and Assistant Treasurer (sound familiar?).


The bell in the Church tower was forged in England was hung in 1772 and developed a crack in 1814 and was recast by Brother Paul Revere and rehung in 1816.  You can hear the bells on You Tube. 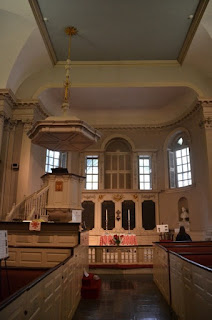 As one would expect in a chapel of this historic nature, many famous persons have worshiped here including:  Dr. Oliver Wendell Holmes, Paul Revere, Benjamin Franklin and General Joseph Warren who was killed in the Battle of Bunker Hill.

By visiting King’s Chapel, one sees the importance that religion played in the founding of America.  This history of this church illustrates the sacrifice that so many of its members made over the last 300+ years in helping shape the American culture.

Next up on the Freedom Trail the Old South Meeting House.