One of the things I learned early in my Masonic journey is that Illinois rod work is militarily precise when done by those who are good at it. I'm not good yet, and since I'm studying for the Certified Lodge Instructor exam, I need all the practice I can get, so I was delighted to find an old Steward's rod at an antique mall in Minocqua, Wisconsin, while on vacation. It was hanging on a wall with a tag that read "Parade Pole. Great Curtain Rod! $22." It was dirty, and the metal rod top was so tarnished it looked like wrought iron, but it was exactly what I needed and I grabbed it.

When I took it up to the counter to pay for it, I mentioned to the gentleman who took my money that the description was inaccurate. "It doesn't matter," he said. I said nothing, but it bothered me, because it does matter. Saying that a thing's true name doesn't matter is to dishonor the reason it exists. My Steward's rod would probably make a good curtain rod, and it is a parade pole of sorts, but it was made for a specific purpose, a Masonic purpose, and its true name tells that story. 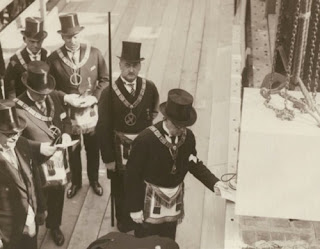 So now it leans in a corner in my house. The brass top polished up nicely, and lemon oil brought some depth to the wood. The base is worn where it was repeatedly taken out of its holder and replaced at stated meetings and degrees, and it's slightly curved from age, but it looks much better than when I first saw it. My rod work is improving, and somehow using a real rod for its real purpose makes me work a little better than I did with the length of PVC I used before. There's weight to it, a solidity that is its own history. Its Masonic journey, interrupted for who knows how long, continues. With its help, so does mine.