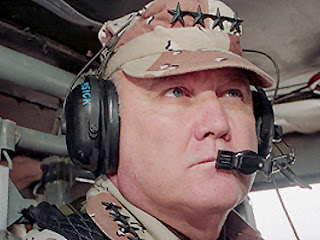 "The more you sweat in peace, the less you bleed in war."

America lost a great military commander today--General Norman Swartzkopf died at the age of 78 in Tampa, Florida.  Best known for his no-nonsense approach during the Desert Storm campaign that so swiftly removed Saddam Hussain from Kuwait, it earned him the nickname Stormin' Norman.