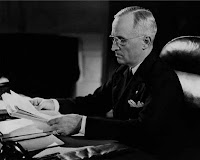 In July1954, little over a year after he ceased being President, Harry Truman wrote a memorandum in which he set out his understanding of the requirements to be a great politician. A young man who chooses to take up politics as a profession should, he wrote, study the lives of great leaders throughout history, including their ethics and their motives. He should study state and local history from its beginnings, and should know thoroughly his county and city governments and their workings. He should prepare constantly and thoroughly, because to be a successful politician required great knowledge and sacrifice, for great politicians do not seek greatness for themselves, but for others:

A great politician is known for the service he renders. He doesn’t have to become President or Governor or the head of his city or county to be a great politician. There are mayors of villages, county attorneys, county commissioners or supervisors who render just as great service locally as do the heads of the government.
No young man should go into politics if he wants to get rich or if he expects an adequate reward for his services. An honest public servant can’t become rich in politics. He can only attain greatness and satisfaction by service. 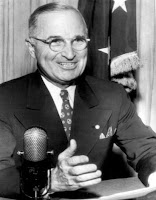 As a farmer, a soldier, a politician, a husband and father, above all as a man, Harry Truman gave his life to service. It would be tempting to say his innate honesty and commitment to public service derived from being a Freemason, but it would be wrong. It was the other way around. Harry Truman was prepared to be a Freemason in his heart long before he petitioned Belton Lodge No. 450 in 1909. When he died in 1972, after sixty-three years as a Mason and a lifetime of service, both public and private, he hadn’t become rich, but he had attained greatness and satisfaction.

R.W.B. Michael H. Shirley is the Assistant Area Deputy Grand Master for the Eastern Area for the Grand Lodge of Illinois A.F. & A.M. He is the Past Master of Tuscola Lodge No. 332 and Leadership Development Chairman for the Grand Lodge of Illinois. He's also a member of the Illinois Lodge of Research, the Scottish Rite, the York Rite, Eastern Star, and the Tall Cedars of Lebanon. He's also a member of the newly-chartered, Illini High Twelve No. 768 in Urbana-Champaign. The author of several articles on British history, he teaches at Eastern Illinois University.