Masonry In The Movies

As a new member of The Ancient Accepted Scottish Rite NMJ, I am always pleased with the events that are going on. This past few weeks the Valley of Chicago is hosting a Masonic film festival which include three films which tie into Freemasonry. The first was The Man Who Would Be King, which I missed but I will end up watching eventually. The second was Murder By Decree. I also couldn't make this one, however I did rent it as to see what it was about and the Masonic influence contained within. I have to say it was a good movie, and the Freemasonry which is portrayed in the movie was neat.

Although I liked the movie, overall I felt it portrayed us as a murderous secret society bent on protecting members, no matter the cost. In this film, signs were given, the Tyrians were named and other information was acted out. The third in this series I did make arrangements to attend.

The movie National Treasure starring Nicholas Cage was a box office smash. I loved the Masonic influence in it and I am excited to attend, watch and discuss the film. Freemasonry in movies and pop-culture is something that I love. If you remember I had a post some time ago about Freemasonry in comic books, in which I mentioned The League of Extraordinary Gentleman which is laden with symbols and ideas.

In my research I had also uncovered that Captain America or as his Brothers know him Steve Rodgers was also a member, as it makes mention of it in one of the books. But returning to films, I researched several movies and scenes which lend themselves to propagating the craft. 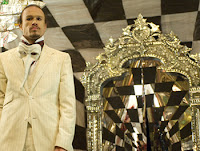 From the quick scene in Aliens (1986) where a Sergeant is wearing a masonic ring to The Imaginarium of Doctor Parnassus (2009) which is said to be in whole Masonic in nature. The later I cannot confirm or deny as I have not seen it. One thing is for sure, as some people like to listen to Pink Floyd's The Wall and see if it syncs up with The Wizard of OZ, I know Freemasons everywhere keep our watchful eyes out in order to catch these Masonic cameos. As the winter months slowly pass, take some time and watch a movie or two. See what you can find.