The Stanley Cup Comes Back To Chicago! 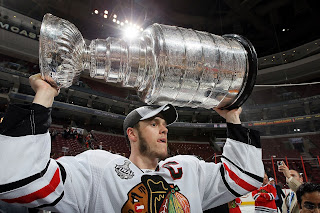 Well it happened again, my home state of Illinois brought back the Stanley Cup! That’s right, the Chicago Blackhawks went on to beat the Boston Bruins in the sixth game of the seven game series and to top it off it all happened in 17 seconds.

If you missed it live, I am sure you have seen all the replays by now. Where was I when the Chicago Blackhawks won the 2013 Stanley Cup? Well, I was in Flint Michigan celebrating with a few of my Lodge Brothers and the Worshipful Master of Fellowship Lodge #490 at a local Tavern over a few pints of Centennial Ale. We were celebrating St. Johns Day and the Festive-board we had just finished. It was a great night indeed.

I am sure you may be thinking why on Earth am I talking about Hockey? Well, to lay it out there, its less about Hockey and a bit more about the Stanley Cup. You see, the cup was actually given by Sir Franklin Arthur Stanley, who was the 16th Earl of Derby, as an award for Canada’s top ranking amateur hockey team. And guess what....?

That’s right, Lord Stanley was a Brother. Besides being a great sportsman, Colonial Secretary and Governor-General of Canada, he was also a member of Royal Alpha Lodge #16 in London England. In his last few years, Lord Stanley dedicated an overwhelming amount of his time to philanthropy. A statue of him is in Vancouver Canada and is located in Stanley park.

Bro. Robert Johnson, 32° is the editor of the Midnight Freemasonsblog.  He is a Freemason out of the First North-East District of Illinois. He belongs to Waukegan Lodge No. 78. He is also a member of the York Rite bodies Royal Arch, Cryptic Council and Knights Templar, and a member of the Scottish Rite Valley of Chicago.  Brother Johnson currently produces and hosts a weekly Podcast (internet radio program) Whence Came You? which focuses on topics relating to Freemasonry. In addition, he produces video shorts focusing on driving interest in the Fraternity and writes original Masonic papers from time to time. He is a husband and father of three. He works full time in the safety industry and is also a photographer on the side as well as an avid home brewer. He is also working on two books, one is of a Masonic nature.