Theodore Roosevelt And His Bear 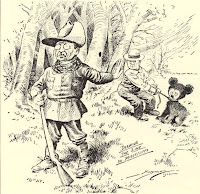 In 1902, President Teddy Roosevelt was invited by the Governor of Mississippi, Andrew Longino, on a bear hunting trip.  Roosevelt was known as a keen hunter, and quite a competition broke out amongst the hunters in the party. But while many of the competing hunters had already managed to kill a bear, Roosevelt hadn't.  There was obvious concern about how that might appear--the new President and great hunter coming home empty handed.

Roosevelt's guide and several of his attendants were able to track down a bear, and tied the exhausted animal to a tree.  They brought the President to the site where they had the bear tied up, expecting him to shoot the bear and therefore save his reputation.  But Roosevelt refused to shoot the badly beaten and exhausted animal.  He said simply is was unsportmanlike, and he wouldn't do it.

The story soon got out, and cartoonist Clifford Berryman drew a famous cartoon of Roosevelt and his bear that became very popular.  In many Berryman cartoons to follow, the little bear (drawn to look smaller and cuter) was always present somewhere in the cartoon.

The public, however, didn't see Roosevelt's actions that day in Mississippi as a sign of weakness at all--but a sign of strength and character.  It actually bolstered his reputation as a moral man, and a decision maker.

Not long after the incident, and the popularity of the cartoons, a man named Morris Michtom got the idea for a new toy--a stuffed "Teddy Bear."  It soon became hugely popular, and has remained so to this day.  And while not fond of being called "Teddy," Roosevelt himself seemed to enjoy having the popular bears named after him.  He gave away many of them during his campaign as he ran for another term as President.

Todd E. Creason, 33° is the founder of the Midnight Freemasons blog and continues to be a regular contributor.  He is the author of several books and novels, including the Famous American Freemasons series.  He is member of Homer Lodge No. 199, and a Past Master of Ogden Lodge No. 754 (IL).  He is a member the Scottish Rite Valley of Danville, the York Rite Bodies of Champaign/Urbana (IL), the Ansar Shrine (IL), Eastern Illinois Council No. 356 Allied Masonic Degrees, and Charter President of the Illini High Twelve in Champaign-Urbana (IL).